The 2022 Cal Poly Universities’ “Stargrazers” float, which beckoned Rose Parade viewers to dare to dream, has won the Animation Award. The team was last recognized for animation in 1984.

The entry, the 82nd float of 86 in the Jan. 1 parade, showcased three giant cows working on jetpacks to achieve their goal of jumping over the moon. The design of the only student-designed and built float in the parade featured a jetpack cow soaring over a crescent moon trailing a stream of cloudy vapor.

This year’s Animation Award is the 61st award for the team of students from Cal Poly Pomona and Cal Poly San Luis Obispo, who before last year’s cancellation had designed and built 72 consecutive floats. 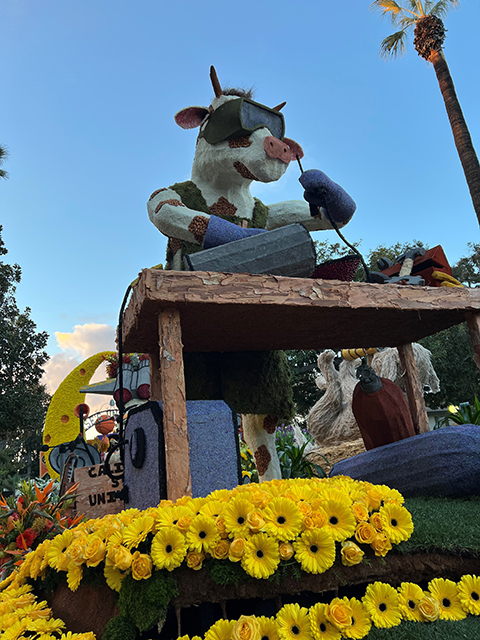 “I’m feeling ecstatic right now. That’s such a huge thing for us. We always try to bring our floats to life through animation. That is something that is a specialty of ours,” said construction chair Sam Linkchorst, who graduated from Cal Poly Pomona in December with a bachelor’s degree in mechanical engineering.

“It’s so amazing to finally see that pay off. Given all of the challenges we have faced this past year, trying to get the float done…working in new space…We lost, in essence, a year of knowledge, but we were able to pull together and build this incredible award-winning float. I am just so remarkably proud of the team and all of the work they put into it.”

Students added special tributes to the design late. They created a mini astronaut as a nod to the late Cal Poly Pomona alumnus Ron Simons (’64, agronomy, ’69, food, marketing and agribusiness management), who rode in the 1962 parade as the “man on the moon” and was responsible for helping to grow the Rose Float program. The team also honored NFL Hall of Fame coach and Cal Poly San Luis Obispo alumnus John Madden, who died on Dec. 28, by adding a football to a pile of milk cans.

The 2022 Rose Float marked a return to the televised storied event, which was canceled in 2021 for the first time since World War II due to the COVID-19 pandemic.

Davide Lanfranconi, a senior mechanical engineering student at Cal Poly San Luis Obispo, served as the hydraulics lead and drive engine operator.  Lanfranconi said despite the delay, the team was able to forge ahead with the work started in 2021.

“It’s been an interesting experience because with COVID, we started initially building a float at the start of the year and with the tournament saying we weren’t going to have the parade, we had to stop work on the float halfway in last summer,” he said.  “We continued working on the float at the start of this year, getting it built for the 2022 parade. This was only the third time the parade didn’t happen, so it is quite a unique event.”

The more than 80 students involved had the opportunity to work in a new environment on Cal Poly Pomona’s campus this year with the completion of the $5.5 million Rose Float Lab and Design Complex. The lab features 14,000 square feet of indoor and outdoor workspace, including a fully enclosed float construction bay with 7,200 square feet of design workspace, storage facilities and a courtyard to host large numbers of volunteers.

The new lab bears the name of two Rose Float alumni – the late Don Miller (’52, horticulture), who got the Rose Float program started in 1948, and Simons, who kept it going and helped it grow.

The Los Angeles County Fair donates nearly 100 years of photos, film reels, news articles, cookbooks and more to the University Library’s Special Collections and Archives. Once the collection is…