Professor Emeritus Ernie Simpson, who taught at Cal Poly Pomona for 32 years and made immense contributions to the success and evolution of the chemistry department, has died after a brief battle with cancer. He was 78.

The longtime Claremont resident began teaching at the university in 1968, when chemistry was a part of the physical sciences department. Professor Emeritus Vasu Dev, who was a member of the committee that hired Simpson, recalls how they spent two hours talking in his office during the interview. Dev, who was appointed chairman of the newly created chemistry department, said that several professors, including Simpson, helped it grow in ranking, reputation and size.

“Dr. Simpson contributed the most,” Dev said. “As time progressed, Dr. Simpson not only kept actively involved in teaching as well as committee work within the department, he started to take initiative in service activities in the school, the university, the professional societies and the community at large.”

Simpson, a native of Toledo, Ohio, earned his Bachelor of Science, Master of Science and doctorate at the University of New Mexico. At Cal Poly Pomona, he served on the chemistry department’s curriculum committee and was the director of the Cooperative Education program from 1980 to 2001, a partnership he forged between companies and the department that provided College of Science students with work experience and funding for their education. The program received the California Co-op Education Association’s Outstanding University Co-op Program award in 1996.

Other accolades that Simpson received during his illustrious tenure include the Exceptional Merit Service Award and the Outstanding Advisor Award in the College of Science, and the prestigious Award of Excellence in Chemical Science from the American Chemical Society, where he also served as a chairman.

Chemistry Professor Philip Beauchamp was a student and later a teaching assistant for Simpson. He even met his wife, Patty, in one of Simpson’s classes.

“So many students benefited and will continue to benefit from Ernie’s generosity and tireless efforts,” Beauchamp said. “It has been a privilege to have been a friend and colleague of Ernie for 46 years. We lost an irreplaceable advocate of the department, college and university.” 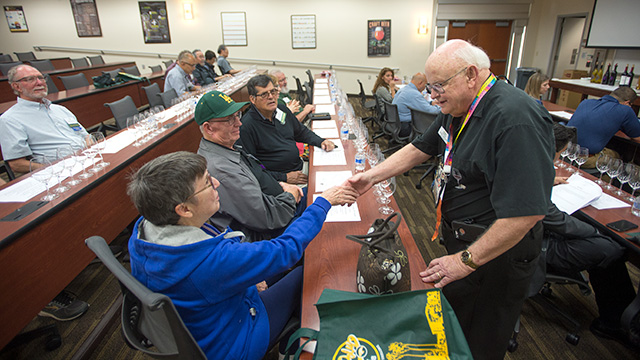 “Ernie was a consistent champion of ensuring that our industrial partnerships were strong through the creation of the Co-Op Program,” Page said. “He always engaged our former alums as guest speakers in the professor-for-a-day events. Our chemistry family will miss him. We will remember his passion for teaching, his love of science and his efforts to create a lasting legacy.”

Melissa Martinez, director of development for the College of Science, worked closely with Simpson on his efforts to raise funds for scholarships and stay connected with alumni.

For the 50th anniversary celebration in 2019, Martinez recalled Simpson making personal phone calls to alumni, faculty and staff to encourage them to give. On one call, Simpson asked an alumna for a $1,000 gift. After a long pause, the alumna told Simpson that she was thinking of giving $10,000, Martinez said.

“He said, ‘Melissa, I am so excited. Fundraising is fun,’” Martinez said. “I told him, ‘That would not have happened with me. You have the relationships.’”

A wine aficionado, Simpson was a member of the American Society of Enology and Viticulture and the Wine Educators and American Wine Society. He published a California wine guide and gave hands-on talks locally and all across the United States on the chemistry of wines as a circuit lecturer with the American Chemical Society.

His interest in wine and dedication to students extended to The Collins College of Hospitality Management. He provided scholarships to Collins College students since 2006 and hosted an annual Chemistry of Wine lecture that had a different theme every year.

Simpson was involved in youth sports, refereeing boys and girls basketball for 58 years with the Foothill Citrus Basketball Officials Association. He also was active in Pace Setters, an organization of retired Cal Poly Pomona faculty and staff.

“Ernie was a treasure,” said Kathleen Harcharik, Pace Setters president and a professor emeritus. “He was a friend and valuable Pace Setters board member. Ernie was our representative to the CSU ERFSA State Council, a member of the Pace Setters Scholarship Committee, and he always invited our members to his annual chemistry and wine seminars, which we all enjoyed.”

Simpson was preceded in death by his wife of 46 years, Jill. He is survived by his second wife, Joan; his son Jeff (Shawnna); stepsons Bryan (Denise) Haskell and Brent (Kelly) Haskell; and his grandchildren, Kyle, Jeffery, Aidan, Caitlin, Morgan, Brittany, Brook and Brad.