Both competitions took place during the Institute of Food Technologists Annual Event, “IFT20,” which was held virtually July 13-15.

Shukla worked on his research project with Gabriel Davidov-Pardo and Olive Li, who are assistant professor and associate professor, respectively, in nutrition and food science.

Although pasta is a staple food that is made of wheat, at least one out of every 141 Americans have celiac disease – meaning they cannot eat pasta – and half of those may not have been diagnosed yet. In addition, six out of 10 U.S. consumers want to increase protein in their diets. 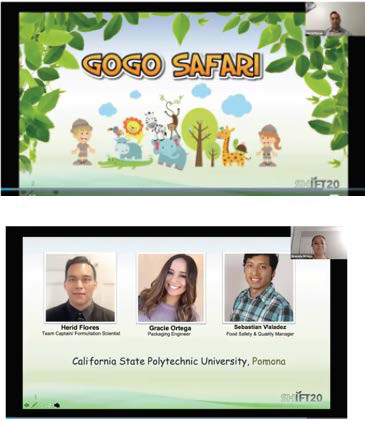 Shukla experimented with making lasagna-type pasta out of different formulations of legumes, like fava beans and peas, which have protein. Legumes use less water and they fix nitrogen in the soil, making them a sustainable alternative.

Shukla was one of six finalists in the event, which included students from Ohio State, Cornell, the University of Wisconsin, and the Universidad de Costa Rica. For finishing in second place, he will receive $750.

In the other competition, graduating seniors Ortega and Flores were joined by Valadez in a challenge to develop a fun and nutritious food or beverage product targeted at kids and/or teens.

The products had to follow the USDA “Guide to Smart Snacks in School” recommendations, which include using more whole grains, low-fat dairy, fruits, vegetables, and lean protein and less fat, sugar, and sodium.

A crucial component of a winning product is the team’s ability to relay the food or beverage’s “smart” qualities to both a technical and general audience.

Ortega, Flores, and Valadez created “Gogo Safari” as a ready-to-eat snack kit for children. It consisted of whole wheat animal crackers that can be dipped in a mixed berry chia seed jam and/or chocolate date spread. It is a good source of fiber, a natural source of fruits, vegan-friendly, and is a shelf-stable product.

The Cal Poly Pomona team was one of six finalists in the event. For finishing in third place, the team won $500. The other teams came from Oregon State, the University of Wisconsin, Rutgers, McGill University, and Utah State.

It was the second consecutive year that a Cal Poly Pomona team finished in third place in the event.

The Institute of Food Technologists (IFT) is a forum for professionals and technologists to advance the science of food and its applications across the global food system.

It is one of only three programs in California to earn the recognition, along with UC Davis and Cal Poly San Luis Obispo.