Elizabeth Scordato, an assistant professor of biological sciences, is the lead author of a study that found the evolution of barn swallows in Asia is shaped by the Tibetan Plateau.

The results, published in the journal Ecology Letters, provide the most convincing evidence yet for the long-held hypothesis that the plateau is an important factor maintaining the vast diversity of birds found in Asia.

“The formation of a species requires the cutting off of interbreeding. Once genes stop moving from one group to another, we can get a new species,” said Scordato.  “Our goal was to find out why two of these subspecies of swallows interbreed a lot over a huge region, but two other subspecies pairs barely interbreed despite being incredibly closely related to each other genetically and occurring in the same location.” 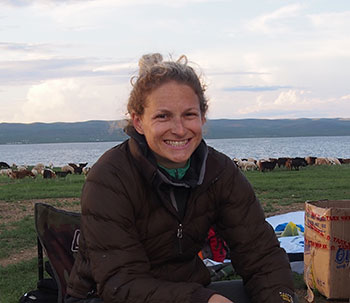 Over three years, she and her research partners traversed Russia, a mountain range in western Mongolia, and a river valley in northern China, catching and sampling 1,288 birds from three closely related subspecies of swallows. They discovered two narrow hybrid zones– geographic regions where different subspecies of swallow came into contact with each other but showed only limited interbreeding. The narrow hybrid zones occurred in central Siberia and in western China, directly to the north of the Tibetan Plateau. They also found a region in northeastern China and eastern Siberia, far from the Plateau, where a different pair of subspecies came into contact but interbred extensively.

Because barn swallows nest only in human structures, the team traveled from village to village and town to town talking to local residents as they looked for the birds.

“We had to explain to people who we were, what we were doing and ask if we could go into their houses and catch their birds. So, the project would not have been possible without really amazing local collaborators,” said Scordato.

They collected blood samples, a tail feather (to determine the carbon isotope value) and noted the color on the breast and throat, the length of tail feathers, and the length, pointedness and curvature of wings to establish which subspecies they were handling. Barn swallows migrate south for the winter, and the isotope value provides clues to where the bird might have gone. 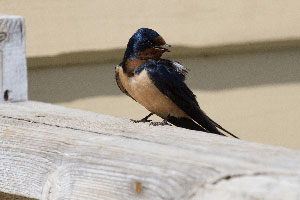 The information from those samples provided confirmation of a migratory divide in the narrow hybrid zones: a geographic region where birds that breed in the same location during the summer fly to different locations for the winter. When the researchers looked at the carbon isotope values, they found that birds on the western side of both hybrid zones spent the winter in Africa, whereas birds to the east spent the winter in Asia. Birds with different overwintering grounds were genetically distinct from each other. By contrast, the birds in the region of east Asia with extensive interbreeding all spent the winter in similar locations in Asia.

To further determine whether different migratory routes were reducing interbreeding between subspecies, the team examined samples from mated pairs of birds across the two narrow hybrid zones. By looking at the association between color, genetics, and where the birds spent the winter, they found the most important correlation was where the birds overwinter. If the birds spent the winter in the same location, they were much more likely to pair with each other than with birds that spent the winter in different locations. While this isn’t evidence that the birds actively avoid the inhospitable plateau, it does suggest that this large geographic barrier helps to keep them genetically distinct.

“Barn swallows are really sort of the perfect test case, but we think this is good evidence that the Tibetan Plateau is a general barrier that affects a lot of different bird species,” said Scordato.

The study was conducted as part of a grant from the National Science Foundation to Dr. Rebecca Safran at the University of Colorado, Boulder, where Scordato was a postdoctoral researcher.