Cal Poly Universities’ “Aquatic Aspirations” float debuted its colorful underwater scene at the 2020 Rose Parade on Jan. 1 and captured the Director Trophy for the most outstanding artistic design and use of floral and non-floral materials. 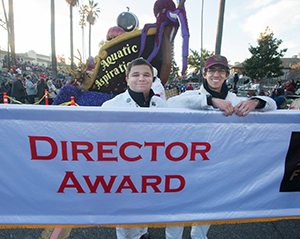 The Director Trophy is the 60th award for the student team from Cal Poly Pomona and Cal Poly San Luis Obispo, who come together annually to build and design the Rose Parade float. The 2020 float is 72nd consecutive entry from the two campuses of the California State University. 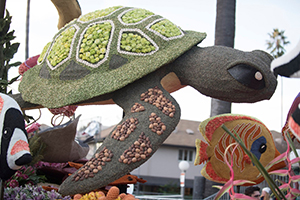 The team made a last-minute adjustment to the jellyfish decorations, which were to be covered entirely with flowers. When students ran out of flowers, they used sliced grapefruit and oranges to extend jellyfish dome down toward the tentacles.

“I’m most proud of how we used a lot of this produce and the tropical elements on this float,” said Heather Hanson, Rose Float director for Cal Poly Pomona. “The produce gives us a unique look. We have everything from bitter melons to kumquats have sushi grade seaweed on here.”

Approximately 30,000 flowers cover “Aquatic Aspirations,” among them thousands of roses, Gerbera and irises along with protea, halconia, honeycomb ginger and more. Bitter melon, bright kiwano melon and succulents provide additional accents. The float earned the California Grown Certification, which requires 85 percent of cut flowers and greens from the Golden State.

This year’s float is the winner of the Director Award for most outstanding artistic design and use of floral and non-floral materials! Congrats to our hard-working student team! #LearnByDoing ? #WeAreCPP pic.twitter.com/kpdp8CGpm9

Learn more about the Cal Poly Universities’ Rose Float program, including the construction of a new Rose Float lab in 2020, on PolyCentric.