Main Menu
Browse: Home / 2019 / December / Building the Rose Float from the Ground Up

Do Students Really Build the Rose Float? You Bet.

Covered in more than 30,000 California-grown flowers and other natural materials, from ground popcorn to kale, the colorful masterpiece competes with floats from professional float builders with decades of experience and is held to the same standards.

In their 72 consecutive years of building a rose float, the students have won 57 awards.

Last March though, there was just half a chassis sitting in the Rose Float Lab. Everything from the heavy super structure to the elements and mechanisms powering the animation had been pulled off the frame, leaving just the axels, steering and braking systems along with both the drive and animation engines. 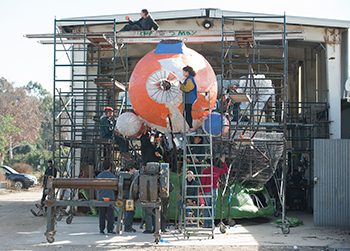 Each spring, the construction team is busy restocking and repairing the machine shop and making any necessary improvements to the chassis, said Chris Maciosek, construction chair and Cal Poly Pomona senior. Maciosek is studying mechanical engineering and working on his sixth Cal Poly Rose Float.

“For the sake of construction,” said Maciosek, “the design is usually 90% there by the end of May. We can start designing the superstructure and the mechanisms (which power the animation), and we can start thinking about how this is all going to work together.

“We’re given a drawing, and we have to figure out how do we make this happen? How big will this element be? How heavy is it? What are its dimensions? What can we play with? It’s different on every float, which makes it very interesting.”

The superstructure is added to the float no later than the end of July, so that the Design Department has a foundation on which they can shape and weld the elements.

“Ironically things on a float don’t actually float,” said Maciosek. “So, the construction team works with design to find ways to structurally support the jellyfish, sea turtles, fish, ray and the giant submarine, in ways that do not detract from the story. We also have to find ways to fit the animation mechanisms inside the elements or inside the pod (base).”

The biggest challenge for construction has been the over-height mechanism, which raises and lowers the submarine to fit under both a telephone wire and a freeway crossing.

“We expect the submarine to weigh 1500 pounds,” explained Macsiosek, “so we need lots of steel and lots of hydraulics to bring it down from 30 feet to 16.5 feet (to go under the bridge). It would be really easy to support if we could use a ton of steel and had geometric freedom, but that would cost a lot of money and result in a bulky and distracting feature.”

The solution was a large structural base bolted to the chassis and concealed under the pod. Three steel arms under the submarine, each weighing about 250 pounds, provide its support. A kelp forest will camouflage the larger beams.

“We have to make the support as small as possible and at the same time as reliable as possible,” said Maciosek. “Over-height is one of those things that can not fail, especially when you’re the second float in the parade. No pressure,” he noted.

And yet, the students from Cal Poly Pomona and Cal Poly San Luis Obispo create amazing floats every year. In 2019, they received the Extraordinaire award.

This year’s under the sea adventure, covered in cushion mums, button mums, strawflowers, Gerberas, roses, pink protea, blue irises, blue statice and more, is sure to be fantastic.