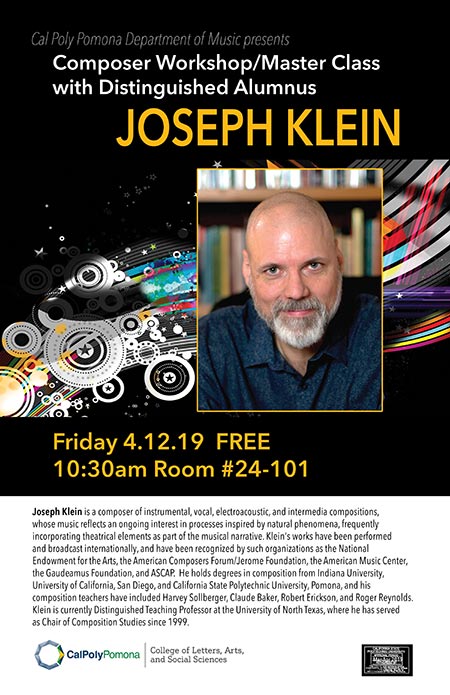 Klein’s work reflects an ongoing interest in processes drawn from such sources as fractal geometry, chaos, and systems theory, often inspired by natural phenomena. Literature is another important influence on his work with recent compositions based on the writings of Franz Kafka, Elias Canetti, Alice Fulton, W.S. Merwin, Milan Kundera, and John Ashbery.

Collaborating with a number of new music specialists in the U.S. and Europe, Klein has composed works for a variety of music ensembles, vocalists and symphonies. He has been a featured guest composer at academic institutions and conferences across the globe. His compositions have been performed and broadcast internationally and have been recognized by the National Endowment for the Arts, the American Composers Forum/Jerome Foundation, the American Music Center and others.

Joseph Klein received his Bachelor of Arts in music from Cal Poly Pomona in 1984. He also holds a Master of Arts degree from UC San Diego and a doctorate in music from Indiana University. He is currently a distinguished teaching professor at the University of North Texas College of Music where he has served as chair of composition studies since 1999.