The Pomona team of Raghav Handa, Michael Pham, Alex Callahan and Gabriela Lopez designed a fully electric aircraft concept that could carry six passengers. The short take-off and landing aircraft could extend its range by docking to Lockheed Martin Hybrid Airships which would continually roam above the greater Los Angeles area.

The judges were impressed by the team’s design process, the detail of the team’s airframe design and the accuracy of the calculations. Judges described the concept as feasible and innovative.

The competition began in mid-January and included two virtual preliminary design reviews with a final report due in mid-April. At the end of April, finalists presented their concepts to a panel of NASA experts.

The challenge was open to teams of full-time, sophomore through senior undergraduate students in accredited U.S. academic institutions. The teams were composed mostly of students studying science, technology, engineering, arts and mathematics (STEAM), but also included students of economics, marketing and other disciplines. 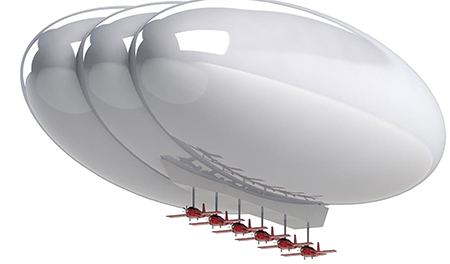 ming in second was a team from Ohio State University that presented a fully electric lighter-than-air concept that would transport 192 passengers to and from Honolulu, Hawaii. The other finalists were a team from Eastern Michigan University and two teams from North Carolina A&T State University.

“As NASA continues to make flight cleaner, safer and more fuel efficient, it’s important that the nation is developing a future workforce with strong science, technology, engineering and math skills,” said Ruben Del Rosario, director of aeronautics at the Glenn Research Center. “We value the creative ideas and unique perspectives that students can offer us in overcoming aeronautics challenges.”

The competition was sponsored by the NASA’s Glenn Research Center, which designs and develops innovative technologies to advance NASA’s missions in aeronautics and space exploration. The first and second place teams were invited to visit Glenn in June for a tour of its facilities and an award ceremony with Glenn leadership.