Alumnus Don B. Huntley Makes a Transformative Gift to the University That Will Benefit Generations of Students

For decades, Don B. Huntley (’60, animal husbandry) has generously given to his beloved alma mater, Cal Poly Pomona.

He has supported research programs, provided scholarships for students, donated pieces from his Western art collection, and funded the creation of an on-campus vineyard.

But now he has taken his generosity and philanthropy to an unprecedented level. Huntley has pledged his 475-acre pistachio farm in the San Joaquin Valley as an estate gift to the university, with farm revenues supporting research, scholarships and academic enrichment.

“Cal Poly Pomona is a fantastic university with a beautiful campus and a unique history. The students who graduate are making an important impact in California, and I want to support them and provide new opportunities,” Huntley says. “We need Cal Poly Pomona students and faculty to continue making advancements in agriculture, biotechnology, science and other research. I’m going to support the school for as long as I have the ability.”

In recognition of his generosity, the California State University Board of Trustees approved in September the college’s new name: the Don B. Huntley College of Agriculture. It becomes Cal Poly Pomona’s only college to be named after an alumnus and the second named college, following The Collins College of Hospitality Management. This distinction also marks it as the second named college of agriculture in the 23-campus CSU system, after the Jordan College of Agricultural Sciences and Technology at Fresno State.

“Don has worked hard his entire life and also believes that his success wasn’t entirely his own,” says university President Soraya M. Coley. “Along the way, someone believed in him, gave him an opportunity and instilled in him the confidence. He believes in working hard and giving back, and that will be his legacy at the Don B. Huntley College of Agriculture.”

Mary Holz-Clause, dean of the college, envisions that Huntley’s gift will allow the college to build more cutting-edge laboratories and hire additional faculty.

“His gift will provide resources for students beyond what state appropriations or student tuition fees can cover,” she says. “We will be able to provide students with the types of science that they are going to need going forward to be successful in their futures and careers.”

Huntley grew up in the San Gabriel Valley when Los Angeles County was still a thriving agricultural center. From an early age, he was enamored with rural America and the
romance of the Old West.

“I just think the West to me is more beautiful,” says Huntley, who graduated from Cal Poly Pomona in 1960. “There are scenic parts of the West that are found nowhere else in the world.”

Huntley started his career selling animal health products to cattlemen and farmers in the San Joaquin Valley for the American Cyanamid Company, which was later absorbed by Pfizer.
When California’s pistachio industry started to take off in the late 1970s and early ’80s, he did his research and entered the industry as a farmer, businessman and pistachio enthusiastic.

“I thought that going into pistachios would be a good deal. It’s a tree that may not produce if you have a terrible drought, but it won’t die. It’s a hardy tree. That’s opposite to
an almond orchard. They don’t last if they don’t get water.”

Huntley’s farming ventures soon blossomed and he was selling his pistachios to clients around the world. 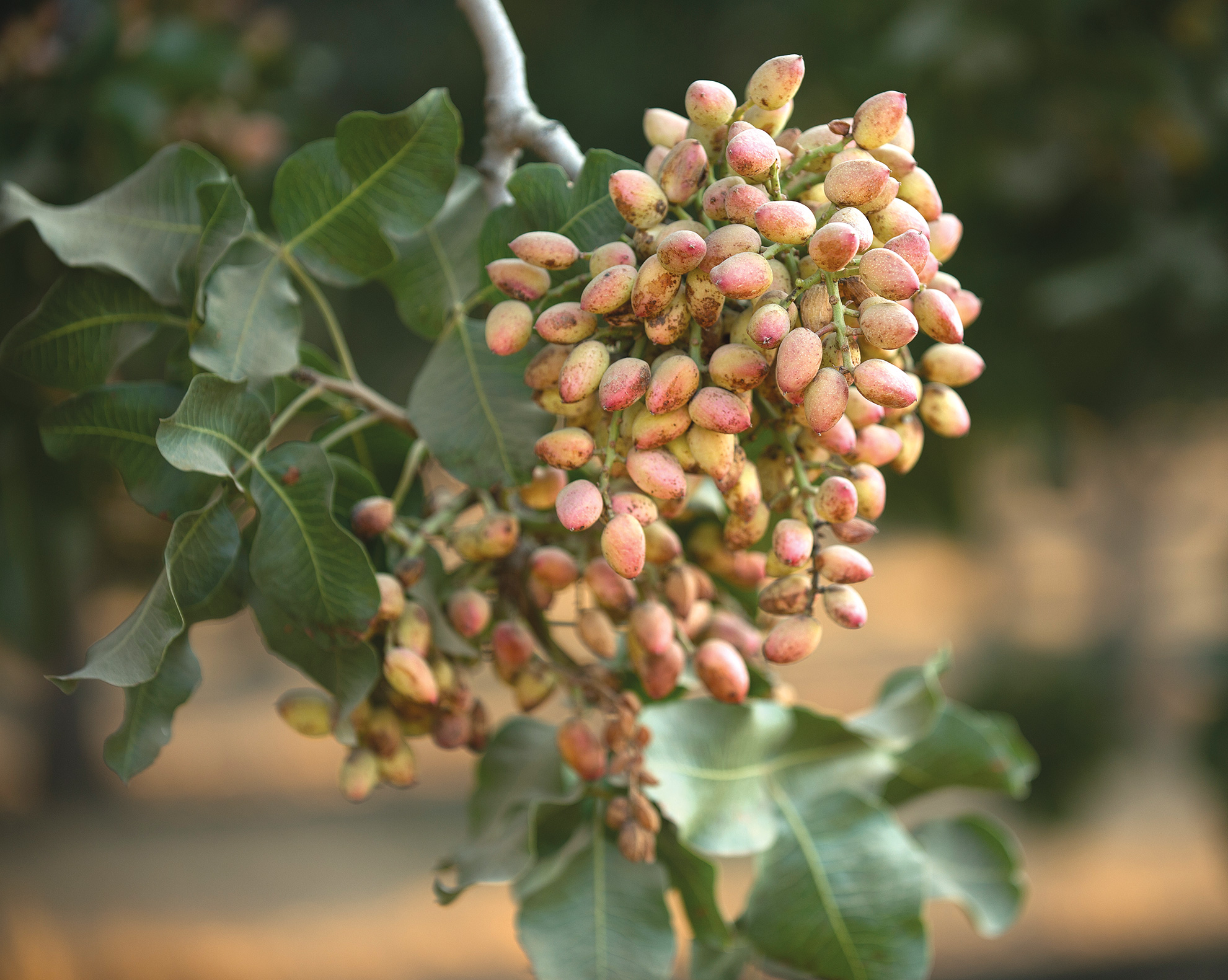 As a businessman and investor, Huntley is meticulous when it comes to research; he reads up on the latest news and calls companies and universities to get more information
before making investment decisions. He also wants to know how things work, why things work and peek over the horizon.

“I got interested in biotechnology. It was a new industry, and there have been some unbelievable developments in medicine through the junior biotech companies in the
United States and foreign countries. To me, it’s an exciting industry. I think biotechnology has made huge strides in saving lives. The whole industry of medicine has advanced
tremendously in the last 20 years.”

When he’s not overseeing his farming operations, Huntley engages in several passions — all of which he pursues with the same determination, appetite for knowledge and experimentation that has made him successful in business.

He collects rocks and gemstones and is fascinated with mining. He once visited one of the largest gold mines in California, the Sixteen-to-One Mine in Alleghany.
When the sport of rock climbing was in its infancy, Huntley climbed at Joshua Tree National Park with nylon rope, carabiners and pitons. He is also an avid collector of fine wine and Western artwork.

Huntley has generously shared some of his passions and beloved treasures with his alma mater. He contributed funding for research into growing disease-resistant and more
nutritious varieties of lettuce, sponsored student scholarships, and supported agricultural literacy efforts. He also supported the creation of the 14-acre Huntley Vineyard at Cal Poly
Pomona, which produces Horsehill Vineyards wine that is served at The Restaurant at Kellogg Ranch and sold at the Farm Store.

“Some of the biggest things he’s given to us are improvements around the AGRIscapes area and actually the Farm Store,” says Dan Hostetler, professor and chairman emeritus of
the plant science department.

Huntley has loaned and donated pieces from his Western art collection for exhibition and display around campus, establishing the Huntley Art Collection under the care of the
College of Environmental Design. He also sponsored the formation of the Huntley Gallery on the fourth floor of the University Library.

“We are so grateful to Don Huntley for sharing his private collection with us, which adds to the culture and conversation of our campus,” says Michele Cairella-Fillmore,
curator and director of the Huntley Gallery and W. Keith and Janet Kellogg University Art Gallery. “The Huntley Gallery is a vibrant space that allows us to display unique works by artists from around the country, and highlight the university’s collections, including the exquisite landscapes and scenes of ‘the Wild West’ in Mr. Huntley’s collection.”

Huntley has also supported scholarships, special projects and enrichment programs in several colleges, as well as the Native American Pipeline and Pathways to Graduation programs.
The pipeline program, the first of its kind in the CSU, introduces college to Native American students beginning in junior high school, and helps to instill a mindset that achievement in higher education is possible. In its fifth year, the program has reached more than 100 students and provides campus housing and scholarships for books and technology.
“The Native American community is fairly small and there are not many Native American college students. We’re helping to build bonds between students, the campus community and even the community at large,” says River Garza (Tongva), a junior majoring in gender, ethnic and multicultural studies. “The tighter bonds we can build — regardless of where these students ultimately choose to go to college — can help students get those degrees our culture desperately needs.”

Huntley’s motivation is borne of compassion and philanthropy.

“He just loves this place. He loves telling stories of when he was a student,” says Wayne Bidlack, a retired dean of the College of Agriculture. “He has adopted us. Essentially, we’re his children.”

University President Emeritus Michael Ortiz can attest to the friendship he and Huntley share. Whenever Huntley visited campus, he would bring pistachios and, on occasion, some of the 100-point-rated Washington state wines from his collection, knowing that someone would enjoy his collection of “grape juice.”

“His contributions to the university have been varied and significant, and are emblematic of his great taste.” Ortiz says.

President Coley met Huntley shortly after her appointment in 2014.

“He understood how important Cal Poly Pomona has been in his life. It was clear that he was proud of the education he received at our university and recognized that education helped prepare him for success as a leader in business,” she says.

Huntley’s affinity and admiration for the university shows through in all his gifts and when he interacts with people.

“I think the thing that motivates him is seeing student success. And I’m not necessarily talking about having a 4.0 GPA,” says Hostetler, who met Huntley about 15 years ago and counts the alumnus as a mentor. “I’m talking about the kids that come out of here with a 2.5 that go on and do great things in this industry in the future.” 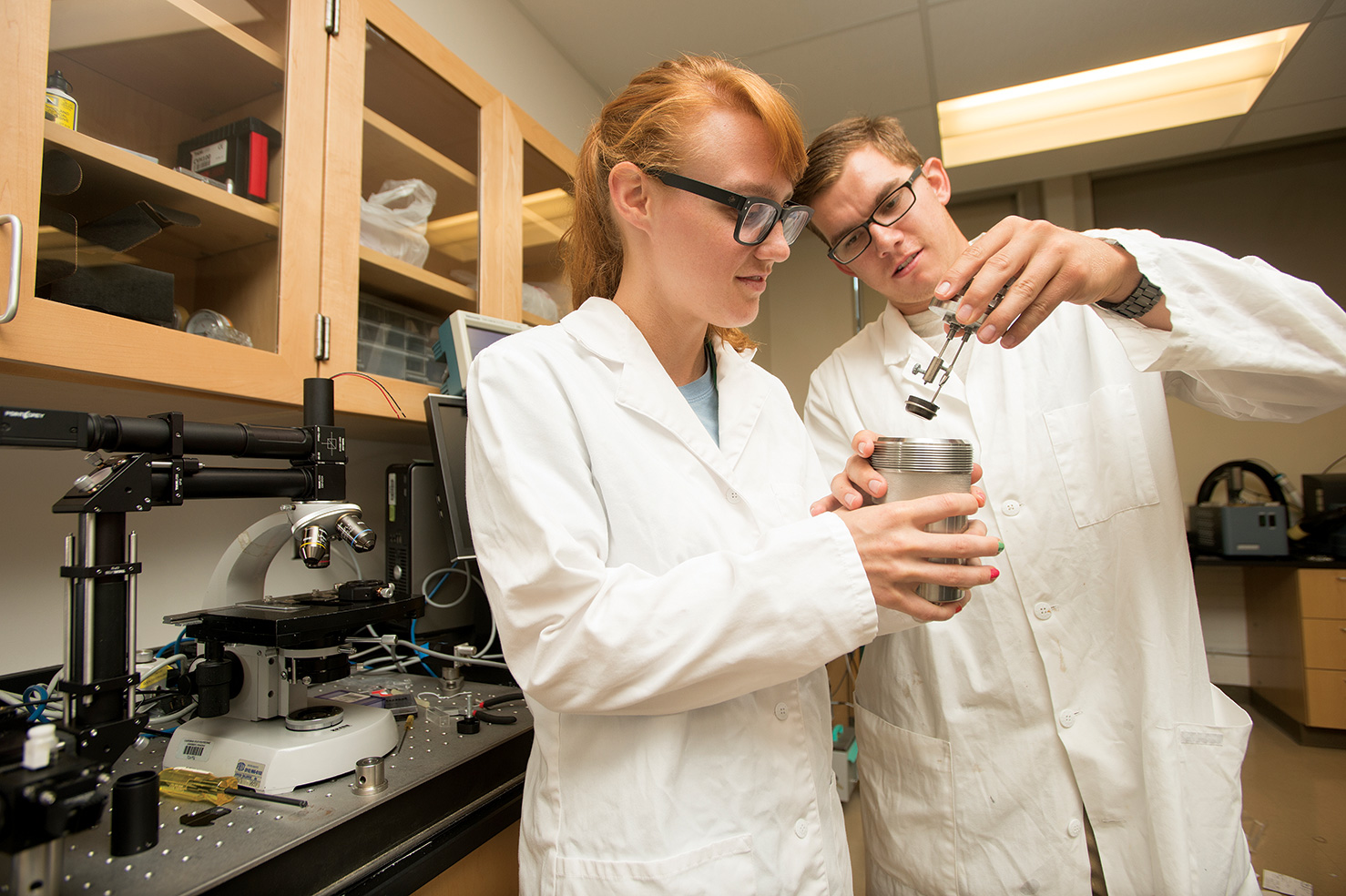 To recognize his professional success and philanthropic gifts, Huntley was named the college’s Distinguished Alumnus in 2004 and awarded an honorary doctorate from Cal Poly Pomona in 2009. He is also a member of the Founders’ Society, the university’s highest honor recognizing individuals and organizations for lifetime giving.

We need Cal Poly Pomona students and faculty to continue making advancements in agriculture, biotechnology, science and other research
– Don B. Huntley 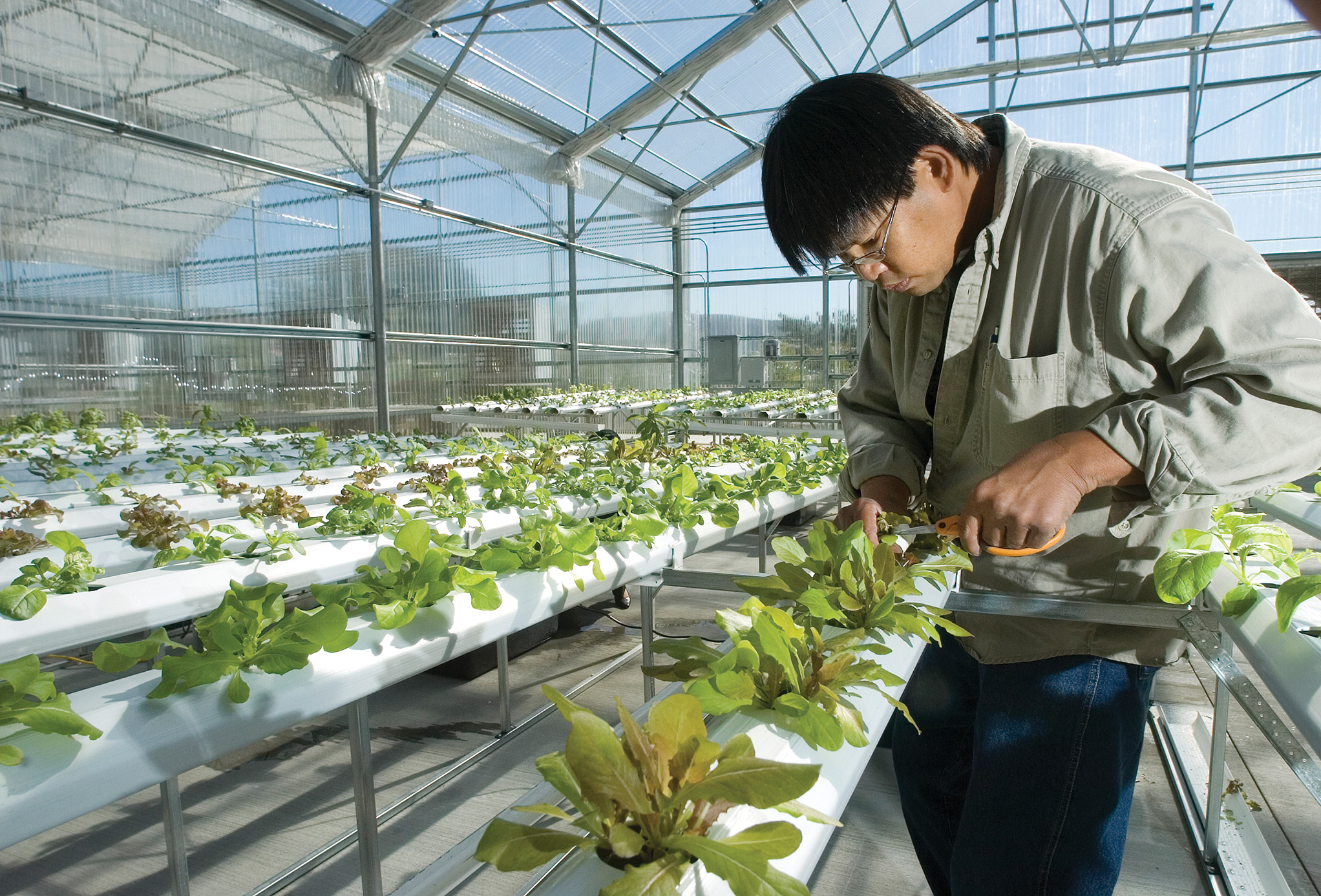 Funding is critical in an era when state support for public universities across the country has declined, says Holz-Clause.

“If we are going to remain a country that is competitive and producing students who are trained in cutting-edge technology, it is so important that we have the philanthropy of gracious individuals like Don Huntley and others, as well as industry, to help provide needed support.” 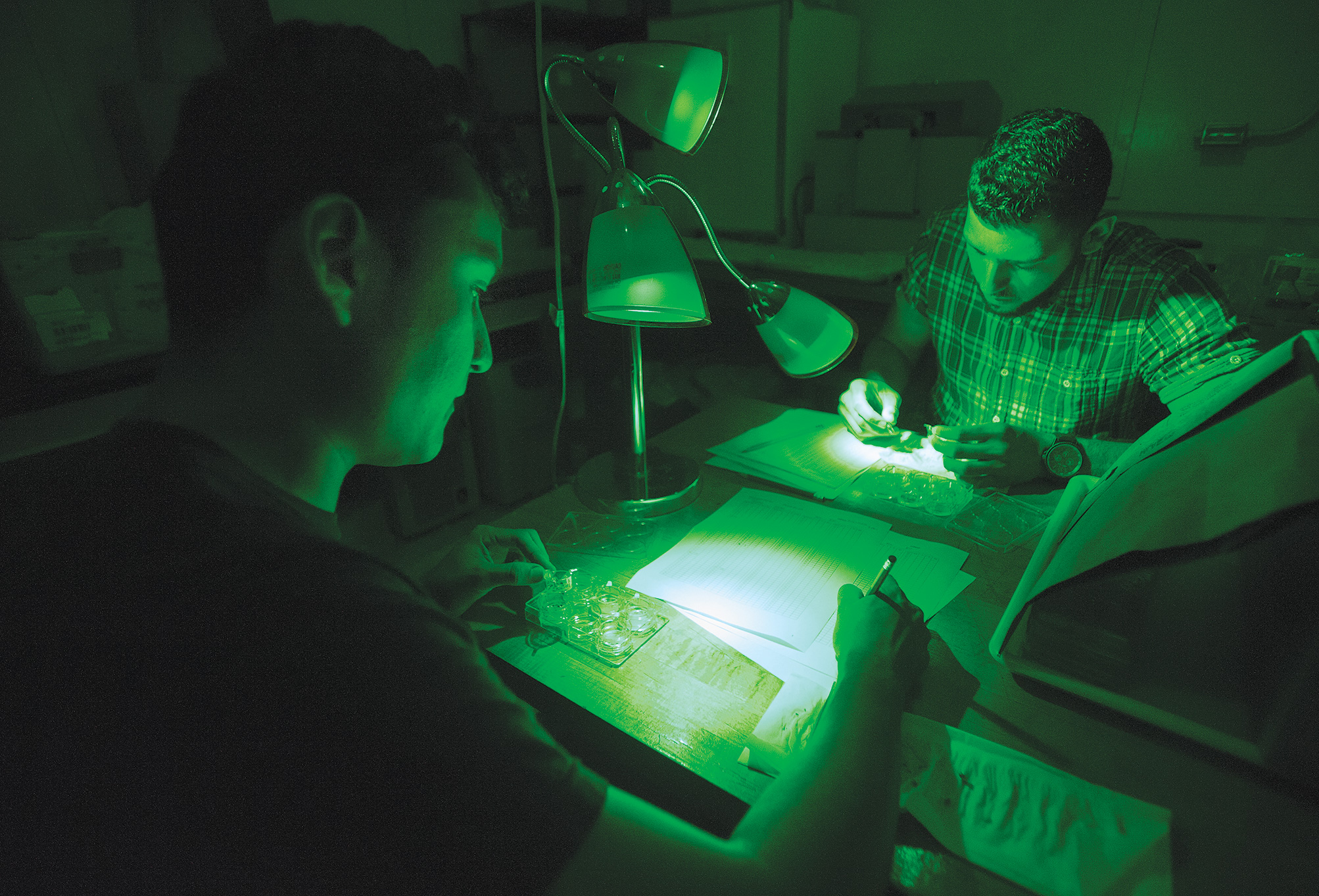 Huntley joins the ranks of visionary philanthropists W.K. Kellogg, Charles Voorhis, and Jim and Carol Collins, each of whom made tremendous impacts and left a legacy of excellence for Cal Poly Pomona.

President Coley says she appreciates Huntley’s humility and recognition that each person’s path will be different.

“He sees his gift as a way to ‘pay it forward’ for future generations,” she says. “His gift will live on, such that decades from now we’re still going to be talking about Don Huntley.”

For his part, Huntley wants to see the university and its alumni gain greater recognition, particularly as a global leader in agriculture education.

“I’d like to see Cal Poly Pomona have a greater presence or knowledge out there for the students,” he says.

The naming of the college is something that Huntley finds humbling and overwhelming.

“I only wish my mother were still alive to see this,” he says. “She’d be thrilled.”

Presidents, deans and faculty describe the transformative opportunities made possible through Don B. Huntley’s gift to the university.

Dan Lee is the communications specialist in the Don B. Huntley College of Agriculture.