While most people were setting up for Super Bowl parties, more than 500 technology enthusiasts gathered at Cal Poly Pomona for Hackpoly, a 24-hour innovation challenge.

Organized by the student club Poly Founders, Hackpoly brought undergrad and graduate students from universities across California and tasked them with taking an idea from concept to working prototype in one day.

“Hackpoly is about setting up fundamental resources that students need to succeed in today’s fast-paced environment and help bring a change in this world for the better,” says Poly Founders president and third-year FRL student Simal Adenwala. “We want Cal Poly Pomona to be the hub of innovation and we hope this is the spark needed to invigorate the entrepreneurship spirit.” 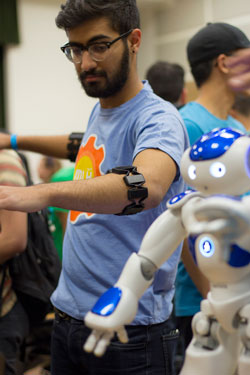 In only its third year of existence, Hackpoly saw its number of applications double to 1,200 from last year’s total. The competition officially kicked off at 11:30 a.m. Feb. 6 and submissions needed to be completed Sunday at the same time.

Three Broncos (Crisrael Lucero, Daniel Madatovian and Matthew Dohlen) developed Cardian Angel and finished second with a vehicle monitoring system that uses an accelerometer to determine disturbances when an owner is away. If an issue is detected, a photo is taken and uploaded to Twitter to alert the owner.

“It was amazing to see the different ways students used the same API,” says Nelson Pizarro, entrepreneurship professor in the College of Business Administration. “While I was judging my first entry, I was thinking in my head, ‘This would have a great use for safety,’ and there were several a few tables down.”

A group of four USC students took home third with Vend, an iOT-enabled vending machine that suggests products based on data acquired through a facial scan. Repeat customers get recommendations based on previous buying history while new users are shown items that appeal to their demographic.

In previous years, Hackpoly has been held at the College of Business Administration. This year, size required relocating the event to Bronco Student Center and enlisting the help of other student clubs such as Students With an Interest In the Future of Technology, the organization asked to maintain the event’s network.

“When I became president [of Poly Founders] I really wanted to take Hackpoly to the next level,” Adenwala says. “We put in so much time and effort as a club to help promote Cal Poly Pomona and what we’re doing.”

Adenwala also credits Hackpoly’s success to the help it received from other clubs like IEEE, Computer Science Society and CPP Game and Development.

Seminars were offered during the 24-hour build period.  Highlighting the forums was a rep from venture capitalist firm Kleiner Perkins as well as an impromptu presentation from alumnus and Yammer co-founder George Ishii.

Following the development portion, teams displayed their inventions in a science fair format where judges walked around the room inspecting each entry. Five finalists then took the stage to pitch their product to the audience and judging panel.

“As an advisor to Poly Founder, I was proud to see it double in size,” Pizarro says. “Hackpoly really shows off Cal Poly Pomona and students’ ability to innovate. As long as we can continue to get corporate sponsorship money, it will only grow.”

Descriptions of all entries can be found here and there is a gallery on the College of Business Administration’s Facebook page.