Citing gender inequity as the moral challenge of the 21st century, journalist and activist Sheryl WuDunn issued a worldwide call to action to help uplift women and girls.

WuDunn, the first Asian-American woman to be awarded a Pulitzer Prize in journalism, spoke to a rapt crowd on campus Oct. 22 as part of Cal Poly Pomona’s Kellogg Distinguished Public Lecture Series.

The activist and author, who co-wrote the books “Half the Sky: Turning Oppression Into Opportunity for Women Worldwide” and “A Path Appears: Transforming Lives, Creating Opportunity” with her husband, New York Times columnist Nicholas Kristof, said the key to ending global poverty and other issues that impact women and girls is to give them opportunities and education.

“Women aren’t the problem,” she said. “They are the solution.”

Donning a candy-red dress, the author and activist shared video clips from documentaries linked to her books. Eva Mendes, Gloria Steinem and Bishop Desmond Tutu highlighted in the clips the work being done in Africa and Asia to stop sex trafficking and spur economic empowerment and education.

WuDunn showed slides of women featured in her books and newspaper articles. She recounted the poignant story of a determined 13-year-old girl in rural China who had a love of school so great that she would sit outside the building when her parents would not pay the $13 annual fee for her to attend.

After WuDunn and Kristoff wrote about her plight, her school received an outpouring of donations that allowed her and her classmates to receive scholarships. She finished school, earned an accounting degree at a vocational college and helped her parents buy a bigger house — one they no longer had to share with their pig. 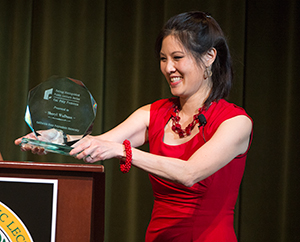 WuDunn told the story of an African woman injured during childbirth and scorned by her village. She crawled 33 miles and fought off hyenas so that she could get medical attention. That woman later became a nurse and is helping to save the lives of other girls like her.

She also shared the tale of an African woman who became a successful potato farmer and banana beer maker after her village, despite women not being allowed to handle money, formed a micro-savings group and decided she would be its first loan recipient and president.

WuDunn talked about the 800,000 girls and women trafficked across international borders each year and the 30 percent of teen girls who get pregnant before age 19 in the United States.

She also discussed solutions to other global problems, including the need for low-cost deworming medicine to keep children healthy and long-term birth control methods. She cited the “empathy gap” as a reason why people don’t do more to help, but said the key to making a difference is narrowing the focus.

“When you can turn around the life of one person, that’s an accomplishment. That’s a real feat,” she said. “If you just have an open heart and an open mind, you can transform a life, and it can have ripple effects.”

Rachel Sanwald, a 12th-grade English teacher who earned her bachelor’s degree and credential at Cal Poly Pomona, said she follows WuDunn’s husband on social media and has watched the couple’s documentaries. She shared the film “Half the Sky” with her predominantly Latino class to expose them to more cultures around the world.

Sanwald said WuDunn and Kristoff use storytelling to effectively convey their cause and offer a sense of hope.

“They make their points, but they use stories to connect people to the message,” she said. “I think people connect to stories when they make people feel like they’re helping real people. It makes it more tangible.”