The road that runs directly in front of the CLA building will be renamed in honor of President Emeritus Michael Ortiz during a ceremony at 11 a.m. on Thursday, June 11.

The campus community is invited to attend the circle naming. Dr. Ortiz served as the university’s fifth president for 11 years. This marks the 13th Bronco Circle Naming Unveiling Ceremony.

Under Ortiz’s leadership, the university posted an increase in graduation rates, completed many significant building projects, improved student access to educational programs, and expanded its philanthropy efforts to include the largest cash gift in the history of the California State University system. 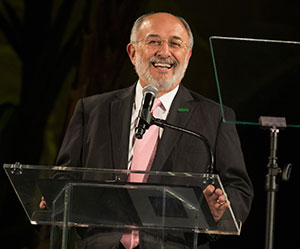 Also during his tenure, the university earned numerous citations for academic excellence, including being named as one of the best universities in the West, according to the 2015 rankings in U.S. News & World Report. Cal Poly Pomona also was listed as one of the 100 best values in higher education in the U.S., according to Kiplinger’s Personal Finance magazine’s 2015 rankings.

Ortiz and his wife, Betty, have also been tremendous supporters of Bronco athletics, having attended many games on campus while also traveling to postseason events across the country.

The most recent naming ceremony honorees include Emma Hilario in 2008 and Ron Simons in 2007. Hilario will attend the June 11 event and receive her sign.

University President Dr. Soraya M. Coley and Director of Intercollegiate Athletics Brian Swanson will take part in the ceremony. There also will be performances by members of the Children’s Center and the Cal Poly Pomona Bronco Cheer Squad.

The university began dedicating the circle in 1997 to support student-athletes and scholarships. To cap off a tremendously successful 2014-15 academic year, Cal Poly Pomona Intercollegiate Athletics won its first Commissioner’s Cup. The award is given to the California Collegiate Athletic Association (CCAA) member institution with the highest aggregate ranking in eight of the CCAA’s 12 championship sports offerings.