Barbara Thomason had just finished a series of paintings in 2007 when she came across a copy of Hiroshige’s acclaimed series “One Hundred Famous Views of Edo.”

Thomason, a lecturer in the Department of Art, spent the next three months examining the book of Ukiyo-e prints compiled by the iconic Japanese artist. During this review, Thomason says she had an “aha moment” that would lead to her next project and a renewed appreciation for her home city.

Saturday, Sept. 20, is the official publication date for “100 Not So Famous Views of L.A,” a book of paintings and writings by Thomason about Los Angeles. The subjects in the book highlight the unique parts of the city that aren’t plastered on postcards or shown on movie screens.

“L.A. is my home, and I really think it is a much more interesting place than most people think,” says Thomason, a Franklin Hills resident.

“People come here and they get on the freeways, they go to Venice Beach, and they see downtown, but L.A. is more than that.”

Paintings in the book, which was published by Pasadena-based Prospect Park Books, include Western Exterminator’s sign along the 101 Freeway, the Los Angeles police gun range near Elysian Park and the Felix the Cat sign above Felix Chevrolet near the University of Southern California campus.

Thomason accentuates the city’s beauty as well as its rougher edges. A painting of Griffith Observatory includes an abandoned shopping cart. A scenic shot of the San Gabriel Mountains also focuses on the Los Angeles River and the 110 Freeway. A skull on the door of the Museum of Death casts an ominous look near a lush tree and a relatively clean Hollywood Boulevard sidewalk.

Prospect Park Books publisher Colleen Dunn Bates says Thomason’s paintings are brilliant because of the angles she takes, colors she uses and what she chooses to include and leave out.

“I fell in love with Barbara’s paintings the moment I saw them, and I knew they would make for a great book,” Bates says.

“Her subject matter speaks to me on a very deep level, because I’m a sixth-generation Angeleno, but beyond that, she’s just such a talented painter.”

Thomason’s goal was never to put a book together of her work, but rather to compile paintings that would provide a reflection of Los Angeles as well as pay homage to Hiroshige. She gave herself a set of rules: compositions were 14 inches by 9 inches, techniques were of bokashi, or color gradations that are common in Ukiyo-e woodcuts, and all of the paintings had to be in the officially defined boundaries of Los Angeles.

She started with a few places that she was familiar with and enticed by. Her first painting was of the Western Exterminator sign that consists of a figure of a man in a top hat holding a hammer behind his back while shaming a small mouse at his feet.

Thomason then drove around and explored Los Angeles in search of unique areas to paint. She would find places that she didn’t even know existed, like the police gun range and a reservoir in Elysian Park.

“There are a lot of quirky oddball little places that are off the beaten path that people don’t go to and that as a tourist you won’t see,” Thomason says. “There is some funny stuff if you just start looking.”

This big undertaking was completed in 2011 not with 100 paintings but with 107. The entire city seems to be covered. There are the Temple Street, Shakespeare and Glendale-Hyperion bridges; El Coyote Mexican Cafe, Astro Burger and Tommy’s restaurants; as well as California Science Center, Los Angeles Maritime and Natural History of Los Angeles museums. Views out the windows of her studio as well as from her dentist’s office also are included.

When a bad back forced her away from painting for about a year, Thomason sat down and wrote about each of her works. The process included hours of research and plenty of rewriting, but Bates says the commentary and stories add more richness to the overall body of work.

Thomason was still not thinking about writing a book until her paintings were profiled by independent television station KCET in October 2012. She got a call soon thereafter from a man who was a fan of her work and got Thomason in touch with Prospect Park Books. 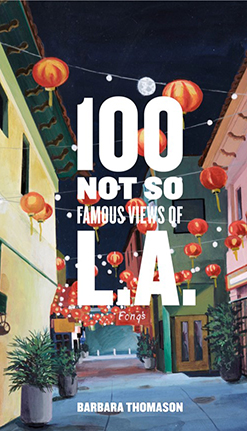 On Saturday, Sept. 20, Thomason and Prospect Park Books will hold a publication party at Angel City Brewery in downtown Los Angeles. The gathering is by invitation only but the paintings will be on display for three weeks. Already, the book has received strong reviews from the Los Angeles Times, Los Angeles magazine and Time Out Los Angeles as well as Mayor Eric Garcetti.

“We’re getting a wonderful response across the board: from the media, from arts organizations, from the L.A. Conservancy, even from the mayor,” Bates says. “I’m so thrilled about the attention the book has received, and Barbara’s work is getting the attention it deserves.”

Thomason has lectured at Cal Poly Pomona since the late 1990s and also taught at the university in the 1980s and in the early 1990s. She will be lecturing this fall about printmaking, sculpture and drawing. She hopes her students will learn some lessons from her experience of publishing the book.

“I hope students understand how much discipline it takes to do art. It isn’t easy,” she says. “And if they are not going to be artists, that they have an appreciation for it. I hope they understand what went into it.”

Thomason will have a conversation about her paintings with David L. Ulin, book critic for the Los Angeles Times, at 7 p.m., Sept. 25, at Skylight Books, 1818 N. Vermont Ave., Los Feliz. Her paintings will also be shown from 6 to 8 p.m., Nov. 8, at Future Studio Gallery, 5558 N. Figueroa St., Highland Park.