Hilda Solis has enjoyed a meteoric rise through the political ranks.

She has served in the California Assembly and Senate and was elected in 2000 to the U.S. House of Representatives. In 2008, she was named labor secretary by President Obama.

But as a La Puente native and a Cal Poly Pomona graduate, she can still relate to many questions that the college community has.

On Tuesday, Solis will share her thoughts and advice on a range of issues when she takes part in a talk-show-like dialogue with College of Environmental Design Dean Michael Woo.

The subject for the talk, set for noon in the Building 7 Gallery, is “Environmental Design and Public Service.”

“By suggesting this theme of environmental design and public service, I was suggesting merging these two together, but also talk about their differences,” Woo says. 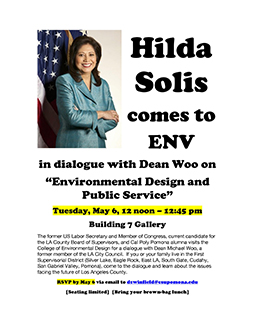 Solis may be asked to comment on issues of local interest such as the Los Angeles River, the proposed San Gabriel River National Recreation Area, and future expansion of rail and bus transit service in the San Gabriel Valley.

Many Cal Poly Pomona students, faculty and staff members live in districts that Solis used to represent in the Legislature and Congress, giving her a special understanding of the issues they are dealing with, such as environmental degradation and pollution.

“Our environment is facing several challenges that highly impact our communities. As a result, it is essential to begin educating our minds and increase our participation in civic engagement,” Solis says.

“We need to work together to secure a clean and bountiful environment for the next generation.”

A scholar-in-residence with the College of Letters, Arts & Social Sciences, Solis will also discuss what students need to do to succeed in a professional environment.

The next First District supervisor will be making key decisions on land-use issues, parks, transportation and development, which are all of significance to College of Environmental Design students.

The California State University system does not support or oppose Solis in her candidacy for the First District Board of Supervisors seat.