From an all-men’s agricultural school to a diverse university of more than 20,000 students, Cal Poly Pomona has grown and changed greatly through the years.

A new play, “Special K: Cal Poly Pomona’s First 75 Years,” will tell that story in a light, comedic way, featuring figures from the past and present.

“The story is told through the eyes of the characters on stage. Will Rogers, the actor-cowboy, is a prominent character in the play. He helps to lead us through time,” says Matthew Reidy, a professional actor and playwright who wrote “Special K.” “He was at the actual event on campus where they dedicated it.”

The play, which will be performed at 4 p.m., Sunday, April 13, in the University Theatre, was written as part of the College of Letters, Arts & Social Sciences’ celebration of the university’s 75th anniversary. Theatre Professor Linda Bisesti started the initial research of historical documents from the University Library last year. Reidy, who is married to Bisesti, then spent several months reviewing the information and writing the play.

Although Reidy invented most of the dialogue between characters, some of the words are direct quotes from historical figures, including Cal Poly Pomona’s presidents, each of whom is represented.

“Special K” will also employ historical pictures to help tell the story and enable the audience to keep track of the changing time periods.

“We’ll have a screen with all the pictures of actual people through time. So we’ll chart Cal Poly Pomona through actual pictures, and then reinterpretations of the characters will appear in front of the pictures,” says director Julian White, an associate theatre professor.

“The play is sort of a day in the life of Cal Poly Pomona. The play starts off in the morning, if you will, and runs the course of the day,” he adds. “What people are really going to see is Cal Poly Pomona growing and changing before their eyes, as if they walked on campus one day and watched it from the first class to the last class – 75 years in a day.” 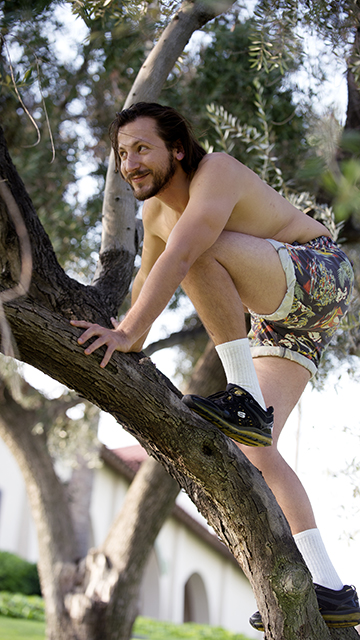 “Special K” will feature 36 speaking parts. The cast is drawn from faculty, current and former theatre students, and professional community actors. Among those participating are Reidy, Bisesti, political science Professor David Speak, and President Ortiz, whom the professors invited to portray himself.

Reidy says it was fun to create dialogue for scenes where Ortiz “meets” Will Rogers and breakfast cereal magnate W.K. Kellogg, who donated the land that became the university campus.

“I will have them written as quotes that he actually said about the university or his vision for the future,” he says. “And then when Will Rogers throws out one of his old, humorous one-liners, President Ortiz reacts to it.”

The producers are striving to be as accurate as possible in the dialogue and action, White added.

“Honestly, it’s not a parody of these guys. It’s an honest re-creation of them,” he says. “I really think any of these characters – if they were alive and saw this play – they would say, ‘Wow, that’s really a great line. I’m glad I sad that.’”

When asked if Ortiz had approval over his lines, White chuckled. “If he wants to make an adjustment in his words, we’ll entertain that idea.”

Tickets will be on sale at the door, but theatergoers are strongly recommended to buy them in advance online at specialkcppfirst75.eventbrite.com.