Earthquakes often strike with little or no warning, which is a major reason they present so much danger, but a team of researchers that includes a Cal Poly Pomona geology professor has successfully forecast both the size and location of a large earthquake well before it happened.

Over the past decade, the team has been studying Costa Rica’s Nicoya Peninsula, a unique area of land that sits directly over a fault like the one that caused the recent devastating earthquake and tsunami in Japan. By measuring changes in land level via coastal surveying and GPS satellites, the scientists recognized that an earthquake measuring near 7.5 on the Richter scale was likely to strike in the near future. In September 2012, a 7.6-magnitude quake struck in that very location.

The team’s research and findings have now been published in the December 2013 issue of Nature Geoscience.

The scientists were able to anticipate where the earthquake would strike and how large it would be by observing how the tectonic plates in that region were moving, says Geological Sciences Professor Jeff Marshall. They knew that large earthquakes have struck that area about every 50 years or so, and they knew that the plates move toward each other at about 4 inches per year. But the fault wasn’t moving — the plates were snagged on each other and stress was building up below the earth’s surface. 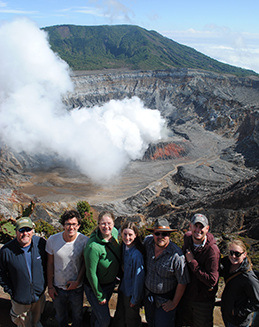 “Based on our observations, we identified a locked area beneath the Nicoya Peninsula,” he says.

Determining the magnitude of a future quake was a matter of doing calculations based on the data they had collected.

It would be tempting to say the team predicted the quake, but Marshall says that’s not the case.

“We wouldn’t use the word prediction,” he says. “We anticipated the size and location of the earthquake, but we couldn’t say exactly when it would occur.”

A true prediction would include a specific time and date, Marshall says. Without a specific time, local officials are not able to evacuate buildings in advance of an earthquake, but there are other things that they can do.

“The last time there was a major earthquake on the Nicoya Peninsula, it was a sparsely populated frontier. Now it is a popular tourist destination with quite a few beach hotels,” he says.

However, not a single person died and injuries were few, despite the fact that the 2012 quake was 30 times more powerful than the 1994 Northridge Earthquake that struck Los Angeles. Marshall says that Costa Rican officials and residents had taken heed of warnings from scientists and implemented earthquake safety preparations that may have saved lives.

Marshall says there are earthquake early warning systems in development — Mexico City already has one, and a system is in the works for southern California. But it is difficult to provide Los Angeles with comprehensive early warning because of the complexity of its many active faults.

“Over the past 10 years, I’ve had more than a dozen Cal Poly Pomona students doing research on the Nicoya Peninsula,” he says. “This was a very exciting opportunity for our students.”

This study was funded by the National Science Foundation and was a collaboration of researchers from the Costa Rican Volcanological and Seismological Observatory (OVSICORI), Georgia Tech, University of California Santa Cruz, University of South Florida, Jet Propulsion Laboratory, and Cal Poly Pomona.