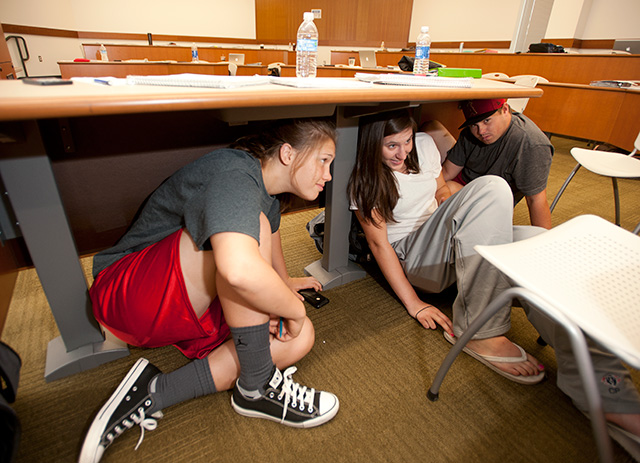 Caltech’s map of recent earthquakes in Southern California is pocked with colored boxes. Virtually all are small, signifying earthquakes with a magnitude of 3.0 or less — little more than gentle reminders that the ground is continually moving. But that could change in a heartbeat.

In geologic time, the region is overdue for a big one — if not The Big One.

Once the real shaking begins, it will too late to figure out how to prepare for the worst. That’s why Cal Poly Pomona participates in the Great California ShakeOut, an annual earthquake drill, scheduled this year for Thursday, Oct. 17, at 10:17 a.m.

Building marshals, floor captains and other emergency responders around campus will instruct people to drop, cover and hold on for one minute. Those who are in class or otherwise unable to take cover under a desk should drop and stay low while protecting their heads. Those outside should move away from things that could fall in a real quake, including light poles.

“The whole idea is to teach yourself to stop while the earth is shaking and stay put, and then when the shaking stops, you can evaluate what your options are,” says Debbi McFall, the university’s emergency services coordinator. “It’s more likely that you will be injured or even killed in an earthquake if you move rather than drop, cover and hold on.”

In conjunction with the ShakeOut, the university will conduct a test of its Safety Alert system. The campus community should expect a brief test message on cell, home and office phones, as well as emails or other communication devices. In addition, a safety message will appear on campus-owned computers.

Be Prepared for Emergencies

The day of the ShakeOut is a good time for those who have an office or work space to assess how safe it is. McFall points to an array of glasses and other objects on the shelves in her office, but says the only thing that would fall in a quake is a stuffed animal. Everything else is secured with putty or museum wax. “The idea is to mitigate the danger,” she says.

The Great California ShakeOut website has an interactive game that shows how to secure items in a room, as well as information about how to prepare for a disaster.

McFall keeps an emergency kit at hand, and she encourages others to do the same. The kit should contain water, non-perishable food, a flashlight (she recommends an inexpensive battery-free type), baby wipes to freshen up, a radio or other device to monitor the news, and glasses and prescription medication if needed. Each kit should reflect the person it is designed to support.

“Everybody has some level of denial: ‘If I don’t prepare an emergency kit, there won’t be an emergency.’ People need to shed that mentality,” McFall says. “The Great California ShakeOut is a way to alert students that they have an obligation to look after themselves.”

Self-reliance in the first hours after an earthquake is critically important, especially because emergency responders, including the university police, will be busy conducting a damage assessment of the campus.

“When the ground starts shaking, officers are trained to stop where they are and stand by for instructions from the dispatch center, which sends them to specific areas of campus based on priority,” McFall says. “Building marshals have the same protocol. In less than an hour we can get a good assessment of where we stand in relation to injury and property damage.”

Compared with other areas of Southern California, the campus is a safe place to be in a disaster, McFall says.

“There are a lot of resources and a lot of trained responders. But with that said, those who know what to do for themselves make it better for everyone. This is a learn-by-doing campus. We’re not doing our students a favor if we don’t teach them to take care of themselves — and the Great California ShakeOut is a great teaching tool.”