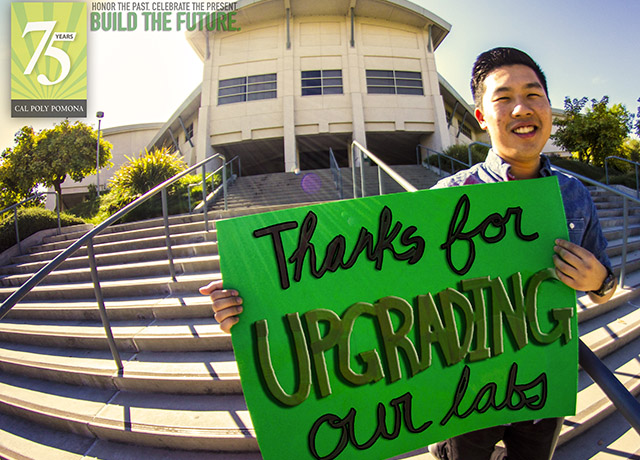 “Build the Future” is one of the themes for this year’s 75th Anniversary celebration, and the Cal Poly Pomona Annual Fund is giving supporters the opportunity to do so with a 36-hour online campaign aimed at raising $75,000.

“The great thing about this campaign is that the donor can decide what to support,” says Dolores Ybarra, director of the Annual Fund. “Colleges, departments, programs, scholarships — whatever area of interest they have.”

The online campaign, the first of its kind for the university, kicks off at 9 a.m. on Tuesday, Oct. 1, and concludes at 9 p.m. the next day. About 75,000 alumni, parents, students and friends of the university recently received a postcard informing them of the campaign, and email messages have provided details as well. During the campaign, donors will have the chance to “like” the Build the Future page on Facebook, which will provide updates on the campaign’s progress. A donor page on the Build the Future website will list the names of donors.

“One of the great things about this campaign is that three generous donors have pledged to match gifts of $75 up to $1,000, for an additional total of $21,000,” Ybarra says. “It’s really heartening to hear of such support for the university.”

Every gift, even as small as a single dollar, will be deeply appreciated, Ybarra says. “Every gesture of support or thanks matters.”