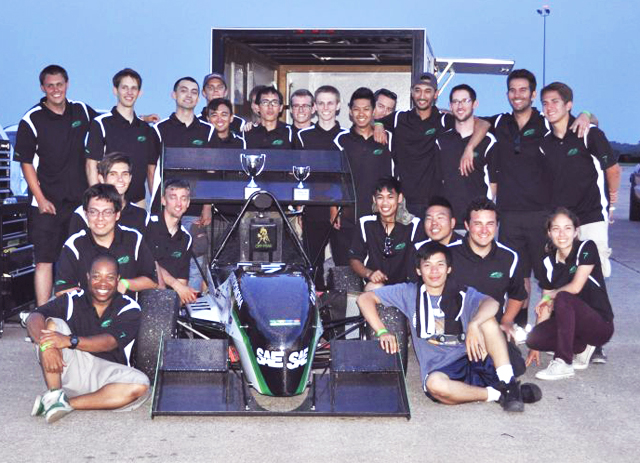 Cal Poly Pomona’s Formula SAE team finished sixth out of 90 teams and the highest among all universities from California at the international race car design competition in Nebraska.

The students were nearly running on empty at the high-energy event in mid-June, which featured a few unexpected bumps, such as a damaged steering rack and a blown engine. The team reacted quickly and worked together to get back on track.

“It’s very stressful, but people help each other out,” said Clifford Stover, the engineering professor who advises the team. “There is a lot of camaraderie between teams and schools.”

When the steering rack broke on Cal Poly Pomona’s car, a student from the University of Washington was ready with welding gear to help out.

“It’s not a race, it’s a design event,” Stover said. “It’s not like being at an Indy car or Formula race where people are hiding their equipment so you can’t see what they’re doing. Everyone’s walking around and looking at each other’s vehicles.”

The engineering students on the team learn by doing as they work year round to prepare for the event, in which they design, build and test a race car prototype. The cars are judged in a range of categories including endurance, acceleration, design and cost.

Stover explained that many of the other universities participating in the competition have a larger budget to work with, which only shines a greater light on the Cal Poly Pomona team’s success.

“We do what we can with what we have,” Stover said. “I think what it comes down to is that we have better engineering students all around.”