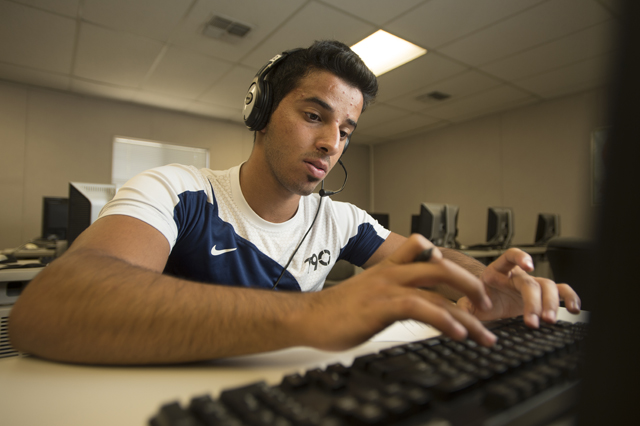 Like many students, 19-year-old Fawaz Alarashidi had his eyes on the big picture. He wanted to attend a university in California and have a successful career in mechanical engineering in his home country of Kuwait. Before he could make his dream a reality, he had to learn English.

And Alarashidi didn’t want to just learn English, he wanted to live it.

When he arrived at Cal Poly Pomona’s English Language Institute last September, he could speak only the bits of English that he had picked up from American movies and retained from the introductory classes in Kuwait.

“I wasn’t able to say a correct sentence,” Alarashidi says. “I didn’t know a lot of vocabulary, and I didn’t know how to explain things. I was afraid that I would say something wrong, and my new friends would not understand or laugh at me.”

For 20 years, the English Language Institute has welcomed students from all over the world who are interested in improving their written and spoken language skills to pursue higher education in the United States.

“When a student comes here and has a good experience, there really is no better marketing than that,” Lesho says.

The institute, which is part of the College of the Extended University, offers five levels of English learning year-round in four 10-week sessions. Students take an assessment test upon entering that places them in the appropriate starting level, and they must pass another test to advance to the next level.

Students come throughout the year as well as for a six-week intensive summer program to boost their English skills and interact with other students from around the world. The classes involve reading and writing as well as oral exercises that promote the students’ abilities to think on their own and speak freely.

“They use a great technique to teach you the listening, speaking, grammar and writing,” Alarashidi says. “For me, it’s perfect.”

The English Language Institute typically hosts an average of 260 students per 10-week session, weighing in a bit heavier in fall and lighter in the spring. Students come from many countries, including South Korea, Japan, China, Taiwan, Kuwait and Saudi Arabia. While they learn English and American culture, they are also exposed to the cultures of their fellow classmates. Alarashidi explained that a large portion of his learning takes place outside the classroom.

“I only speak English here, and my new friends have to speak English too,” he says. “English is the only way we can communicate with each other.”

Alarashidi’s goal seems even more attainable now that he is adept at speaking and writing English. When he returns to Kuwait in September, after completing the highest level classes, he plans to apply to mechanical engineering programs in the CSU.

He looks to the future and reflects on his year in California.

“In Kuwait, I had the opportunity to choose to study in my home country or in America. I chose to explore a new culture and have a new experience and start a new life in America. This was a great experience for me.”