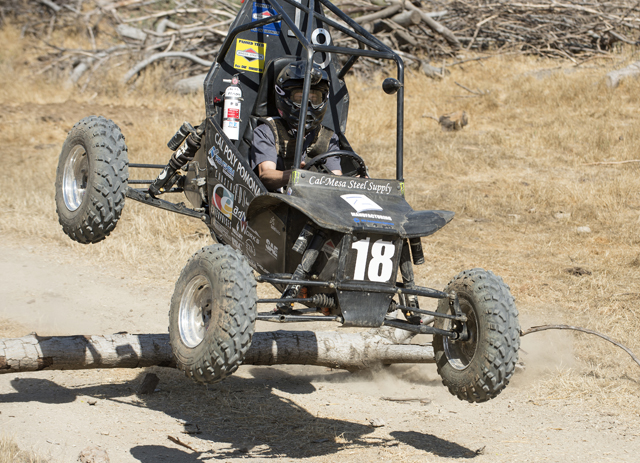 The race was one portion of SAE International’s Baja SAE Series, which gives students the chance to design and build prototype vehicles, and then put them to the test on a punishing course that includes hills, obstacles and rock climbing.

“It’s truly international, truly multidisciplinary,” says Clifford Stover, a Cal Poly Pomona engineering professor who advises the team. “We have students from all of the different majors and colleges at times.”

The race left many vehicles broken down or rolled over, but Cal Poly Pomona’s team cruised to a fourth-place finish. Its sixth-place overall score includes non-timed scores in areas such as vehicle cost, presentation and design.

Ranked No. 1 in California, the Cal Poly Pomona team bested competitors that included Cal Poly San Luis Obispo and UCLA. A new accomplishment this year was the team’s advancement into the design finals. It was one of only eight teams to be selected by judges for the category.

Stover said the team made it into the design finals because of special systems the students built for collecting real-time data about the vehicle, such as engine and transmission temperature, wheel speed and fuel economy. “The judges really liked that,” Stover says.