Cal Poly Pomona’s Facebook fans have selected the university’s 75th anniversary T-shirt. The winning design features a large “75th” in a circle of olive leaves, the years 1938-2013, and a small image of a Bronco. 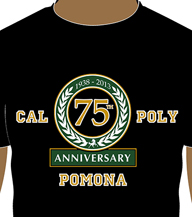 More than 60 ideas were submitted for the contest, and Facebook fans voted on the top eight, with 835 total ballots cast. The T-shirt will be sold at the Bronco Bookstore in the fall when Cal Poly Pomona begins its 75th anniversary celebration.

“I felt that a 75th anniversary would be best presented through some kind of circular enclosure to symbolize the community that has stuck together for so many years,” he says. “I figured that the target market for the design would most likely be alumni, so I chose to use a more traditional style.”

Armend, who considers himself a young entrepreneur and an emerging video artist, founded Transist Film Company at age 17 and hopes to work in the advertising industry after graduation. He also designs and manages the website of the Cal Poly Pomona chapter of the American Marketing Association.

The second-place design shows the campus’ original horse stables. The third-place design features a multitude of words forming a “75,” which is overlaid on an image of a Bronco. They will receive $50 and $25 Bronco Bucks gift cards, respectively.

To learn more about the university’s 75th anniversary, visit www.cpp.edu/75th.