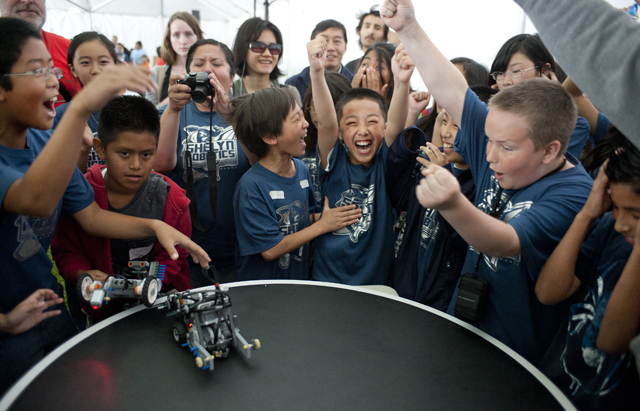 Tiny electric motors will whine, plastic pieces may go flying, and elementary school students will cheer as the robots they’ve built duke it out at this year’s Robot Rally.

Hundreds of students from 13 schools throughout the region are expected to attend the rally on Friday, May 10, when they will pit their robots against each other in challenges such as sumo wrestling, speed trials and an obstacle course, presenting a wild spectacle for attendees.

For the students, the reward will be vanquishing a rival robot. But for the organizers of the rally, the real prize is that the students are learning something significant, and hopefully getting a dose of inspiration at the same time.

This year, more than 800 are expected to participate in what is the largest event of its kind in the nation. The Robot Rally involves faculty from the College of Engineering, College of Science and CLASS, and counts Time Warner Cable and the Motorola Foundation among its sponsors.

Mechanical Engineering Professor Mariappan Jawaharlal, known as Jawa to colleagues and students alike, said the goal is to give youngsters a reason to be excited about STEM (science, technology, engineering and math) subjects.

“The ‘ah ha!’ moment – the critical time to capture students’ interest in STEM – is not in their freshman year in college. It’s not high school or even middle school. It begins in elementary school,” Jawa says. “It’s a critical time for teachers to link theory to real-world examples before students lose interest in the subjects.”

But long before the elementary school students picked up their first servo motors or learned anything about computer programming, it was their teachers’ turn to be the pupils.

In late November, the teachers gathered on the Cal Poly Pomona campus for a crash course in robotics with Jawa. He went over the importance of programming for turning the robots from inanimate objects into dynamic machines, using himself as an example.

“If you imagine me as a robot … I have a structure,” Jawa says. “But with the structure only, I would be dead.”

He also explained how the robots use ultrasonic sensors to avoid running into walls.

“How do bats go that fast in caves without hitting each other?” he asks the teachers.

Fast-forward six hours and the teachers have grouped themselves into teams and assembled their robots. The classroom is filled with bleeps and bloops as the tiny automatons attempt to follow black lines marked out on the floor. Some faithfully adhere to the path, while others jerk back and forth wildly, apparently needing some additional programming.

In another corner of the room, teams are trying to program their robots to maneuver around a table without falling off the edge. One team isn’t having much luck, and its robot keeps tumbling over the side. Finally, they master the programming. The robot drives full speed toward the edge, but just when it looks ready plummet over the side once again, it halts, pauses for a moment, and turns around. The team members, their looks of concern turned to smiles, scoop up their now-obedient robot.

Shelley Andros, a sixth-grade computer teacher from Whittier Christian Schools, attended the workshop and says the Robot Rally is great for her students because it teaches them that it’s OK to like math and science. She says that it often helps the shy students to come out of their shells.

“Sometimes one quiet student that never says anything gets it done,” Andros says.

The program can be especially good for girls, who are historically underrepresented in STEM fields, says Clarisa Sharp, a fifth-grade teacher from Euclid Elementary in Ontario.

“We find that the girls are more efficient,” Sharp says. “They might take longer doing the building and the programming, but they’re the ones who get it right first.”

A few weeks later, the students at Sharp’s school were divided into teams with names like Robo-Jags or Lego Smartness, and were already making significant progress on their robots. The tiny combatants were mostly assembled and it was time for programming.

“Your robot has a brain, but that brain is empty,” Sharp tells the students. “If you want it to go forward, you have to tell it.”

The goal of the day was for the students to get their robots to navigate a square path without any outside input. In a near re-enactment of the scene that played out in the teacher-training class with Jawa, some of the robots faithfully obeyed their programming commands, while others went rogue.

Bryan Serran, 9, of team Lego Smartness seemed to be having a blast.

“You get to make it do whatever you want,” Bryan says of his team’s robot.

After a couple of unsuccessful programming attempts, Bryan and the rest of the team give it another shot. Their robot moves forward, turns right, moves forward again, and repeats the process twice more, completing the square.

“We are the champions!” Bryan shouts.