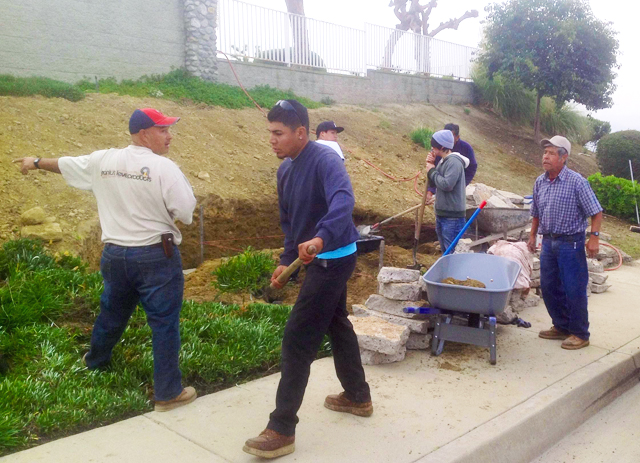 For nine days in February, Southern California was kept on edge while authorities searched for disgruntled ex-cop Christopher Dorner in a massive manhunt stretching from San Diego to high in the San Bernardino Mountains.

By the time the tragic ordeal was over, five had been injured and six had been killed. One of Dorner’s first victims was Monica Quan, a 28-year-old assistant basketball coach from Cal State Fullerton, who was killed along with her 27-year-old fiancé, Keith Lawrence.

In March, a group of Cal Poly Pomona landscape architecture students and Emeritus Professor Rodney Tapp teamed up to create something to honor the lives of Quan and Lawrence — a memorial garden.

Tapp, who continues to work as a landscape architect after retiring from teaching, said the garden came about through a simple request from one of his clients, who happened to be a neighbor of Quan’s parents.

“They and the neighborhood wanted to give [the Quans] a Japanese maple to memorialize their daughter,” Tapp says. “I told them, ‘If you get them a maple, you need a garden for it.’”

The garden wouldn’t just be something to look at, Tapp and the Quans decided. It would give something back to the Walnut neighborhood where the Quans live. (Quan’s father, Randy Quan, served as Cal Poly Pomona’s police chief from 2002 to 2004.)

The garden took shape as a sidewalk-level alcove that invites passersby to stop and rest on two boulders, one representing Keith, and the other representing Monica. It features plants with red foliage in remembrance of Monica’s favorite color.

Tamara Lopez, a third-year landscape architecture student, said she volunteered to help with the garden because it would give her a chance to “make other people’s lives better.”
“I thought, ‘I need to do this because I want to be part of the solution,’” she says.

“During the process, Rod taught us much more than the labor,” Ta says. “When you design something, you have to give it meaning. It’s what makes a strong design.”

Tapp also taught the students about wiring landscape lighting, assembling an irrigation system, and planting a new tree the correct way, among other things.

“I got so much from the process — I walked away with so much,” Lopez says.

After the garden was completed, Tapp, the students and neighbors had a small dedication ceremony, “just a little neighborhood thing,” for the Quans, Tapp says.

“I didn’t know either of the individuals, but of course I followed the story in the news,” Tapp says. “I thought it was an honor to participate.”