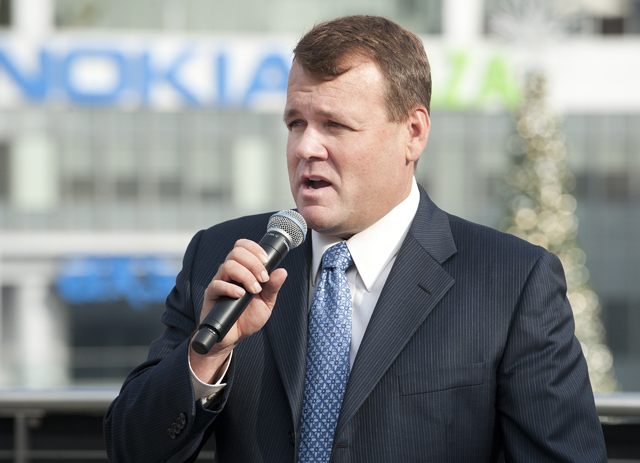 After almost six years at the helm of The Collins College of Hospitality Management, Dean Andy Feinstein has accepted the position of Deputy Provost at San Jose State University. Feinstein is the most senior dean at Cal Poly Pomona and has guided The Collins College through significant changes.

“Cal Poly Pomona will benefit from Andy’s hard work for generations to come,” said University President Michael Ortiz. “We will greatly miss his leadership, his vision and his friendship.”

“Andy has been a great force for positive change in The Collins College,” said Provost Marten denBoer. “I want to thank him for his leadership. He has expanded the educational opportunities for students, both undergraduate and graduate, enriched the curriculum, expanded the research profile and made possible a new facility.”

During his time at Cal Poly Pomona, Feinstein has been committed to creating more professional development opportunities for students. Examples include a Mentor Program, a comprehensive career services program, and alumni outreach to support students long after they graduate. He has fostered a more diverse student population by encouraging outreach to under-served communities and worked with industry partners to create more scholarships for students.

“I have enjoyed my time at The Collins College and I have deep admiration for this community of faculty, staff, students, board members, alumni and university leadership,” Feinstein said. “I want to thank them all for working with me to advance the best hospitality management program in the state of California.”

Feinstein created an environment supporting teacher-scholars by awarding summer research stipends to faculty and has remained actively published himself during his time as dean. In recent years, he co-published more than 10 scholarly articles and a new edition of his widely used textbook Purchasing: Selections and Procurement for the Hospitality Industry.

He guided the college’s Board of Advisors, which represents some of the most accomplished hospitality industry leaders. Most recently, the board and college hosted Hospitality Uncorked, which raised more than $550,000.

“It has been an incredible honor to serve as dean of The Collins College,” Feinstein said. “It took much soul searching to leave a place I have grown so fond of, but this new position presents an opportunity for me to expand my interest in supporting a broader university constituency, and it is one I must take.”

Feinstein will transition into his new position at San Jose State by the middle of July.
In the coming weeks, Provost denBoer will announce plans for interim leadership for The Collins College as well as search information.