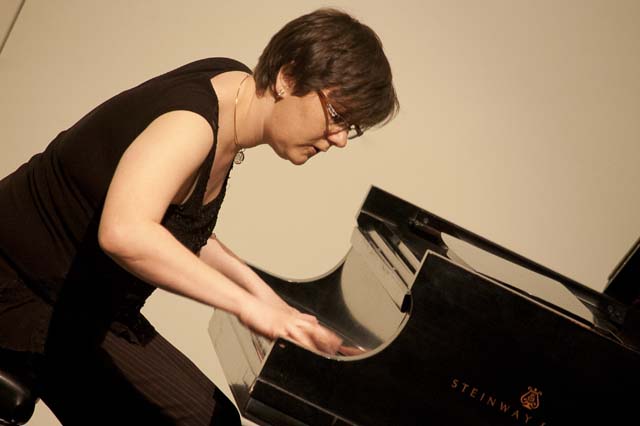 “The pieces on my program are mesmerizing, powerful and imaginative, and represent one of the most significant and exciting musical endeavors I have ever undertaken,” Shpachenko-Gottesman says.

The concert is a series of solo and duet performances of contemporary music written by composers Tom Flaherty, James Matheson, Adam Schoenberg and George Crumb. The concert will feature two new solo piano pieces composed by Matheson and Flaherty exclusively for Shpachenko.

Matheson has written works for the New York and Los Angeles philharmonics, the Chicago and Albany symphony orchestras, Carnegie Hall and the Borromeo String Quartet. Previously, he was executive director of the MATA Festival of New Music in New York. He is currently the artistic director at Neighborhood Classics at P.S. 142, a concert series that raises money for one of New York’s most underserved schools.

Flaherty is the John P. and Magdalena R. Dexter Professor of Music at Pomona College. He is also a cellist and member of Quartet Euphoria. Music ensembles have performed his work throughout Europe and North America.

Flaherty, Matheson and Schoenberg will be in attendance Wednesday, sharing their insights and inspirations with the audience.

The festival also marks the final concert Shpachenko will perform before she begins recording for her World Premieres CD this summer.

Tickets are $15 general/$10 student, available at csupomona.tix.com or through the Publicity Office in Building 24-188.