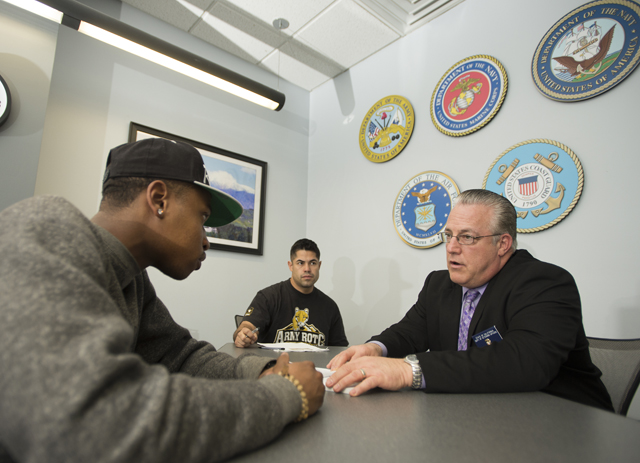 For veterans, leaving the military and enrolling in college is often a difficult transition.

Many have served multiple tours overseas in Afghanistan or Iraq. Experiencing multiple tours may increase the possibility of veterans returning home with post-traumatic stress disorder, traumatic brain injury, and other physical or mental wounds. For most veterans, a campus environment is less structured than the daily regimen they had while in the service.

They are generally older than their classmates, and they are surrounded by civilians who often have no inkling of what they’ve endured. Experiences such as these can make college life much more challenging for veterans since from their perspective college campuses can become bureaucratic roadblocks.

The Veterans Resource Center, which opened last fall, is the first point of contact for veterans looking for answers about financial aid, military benefits, registration and orientation, or wanting to resolve individual issues that require one-on-one assistance. One CalVet official considers the center a model for other universities.

“The basic foundation is in place at Cal Poly Pomona to provide a higher quality of care and service to the student veterans,” says James Schickel, a CalVet local interagency network coordinator. “Relationships have been built and partnerships have been developed with various faculty, community partners and veteran service providers. That’s what it’s all about. Now the next step is to make the process standardized and systematic.”

Schickel knows of what he speaks. A retired Marine sergeant major, part of his CalVet job is developing and maintaining relationships with colleges and universities in Los Angeles, Orange and Ventura counties.

“The number of veterans enrolling in college has grown since the passage of the Post-9/11 GI Bill in 2008, which increased educational benefits for those who have served in the military on or after September 11, 2011,” says Elke Azpeitia, Cal Poly Pomona’s veteran services coordinator.

Most veterans begin their post-secondary careers at a community college. Cal Poly Pomona currently has more than 300 student veterans, while Mt. San Antonio College up the road has about 2,000. Some veterans get lost within the community college system since transitioning into a new bureaucratic environment may often be a frustrating and overwhelming experience. These transitional challenges are exacerbated when veterans that are lost within the community college system end up fully exhausting their VA educational benefits.

Although most colleges and universities do have veteran resource centers, some provide more resources and information than others, Schickel says, making it difficult for veterans who might transfer from community college to a four-year university.

In addition to GI Bill benefits for education, veterans can obtain health care and psychiatric services, job search assistance, vocational rehabilitation and employment for those with disabling wounds, even housing vouchers, food bank access and transportation assistance for those who qualify through the VA, CalVet and other external resources.

CalVet also has entered a partnership with the California State University system through the Troops to Trade program that provides veterans with vocational training in 10 trades. It’s part of the charge that the federal government has given to public universities and colleges since the 1940s and 50s to help veterans make the transition to civilian life, Azpeitia says.

And yet, Schickel still sees areas for improvement in veteran services.

He would like to see standardized training workshops for university employees who administer veteran services. Schickel is partnering with a Los Angeles film school to create a presentation on veteran benefits and entitlements that he hopes will be distributed to all college and university campuses in California and also be made available online.

Another area is increasing awareness among instructors, campus police and public safety officials about interacting effectively with veterans who may have PTSD or traumatic brain injuries.

“If you have a student vet that’s in a class having a meltdown, how is the professor going to react?” Schickel says. Schickel hopes that even those who oppose war will support the nation’s veterans.

“Yeah, (serving) was our choice,” Schickel says, “but we shouldn’t be stigmatized for having served.”