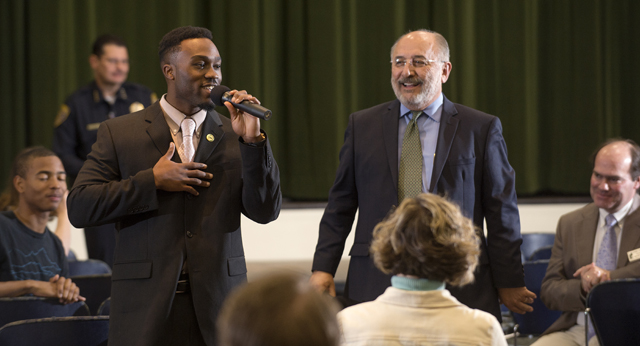 Forums addressing traffic management and safety were held before and after Pizza with the Presidents on April 18, so it was not surprising that those topics were prominent at the quarterly Q&A. The answers from campus leadership also followed a pattern: be safety conscious, seek input for solutions, and prioritize projects to get the most out of finite resources.

Recent changes around the parking structure, which included restricting traffic on Magnolia Lane and making Oak Lane a one-way street, drew several questions. University President Michael Ortiz said one of the goals was to reduce traffic on Red Gum Lane and make it easier for pedestrians to cross the street to the College of Business Administration buildings. He reminded them, however, that they need to take “some level of personal responsibility” by avoiding jaywalking and being aware of their surroundings.

Ortiz also addressed the parking ban on Temple Avenue, reminding those in attendance that Los Angeles County made the decision following an inquiry from him on behalf of the campus about how to improve safety on the busy thoroughfare.

Acting Police Chief Bruce Wilson offered advice to those who are worried about the security of their vehicle and the property inside.

“It’s really a common sense issue,” he said. “Do not make your car a target. Lock it and have an alarm.” He also urged people to write down their car’s license number in the unlikely event that it is stolen. The sooner the police know what they are looking for, the better the chances that they will find it. He added that the university is considering putting surveillance cameras in parking lots, “but these things take money so we will proceed cautiously.”

Wilson also dispelled the notion the police department benefits financially from writing tickets for traffic offenses, pointing out that the law prohibits police agencies from collecting the revenue. Tickets and other enforcement techniques – verbal warnings or simply directing someone with a gesture – are about bolstering a sense of common courtesy and educating the public about safety.

Other topics covered during the hourlong session included the costs and benefits of the Student Success Fee, policies on academic and disciplinary probation, the change from the quarter system to semesters, and the listing of minors on diplomas.

“Can we do that by June?” ASI President Chris Osuala jokingly asked. “I have a minor.”

Ortiz said Osuala certainly did not need a minor on his diploma to succeed.

A question posed at January’s Pizza with the Presidents produced concrete results..

Here is a sampling of the questions from the most recent Pizza with the Presidents, which were accepted in person and through university’s Facebook and Twitter accounts: