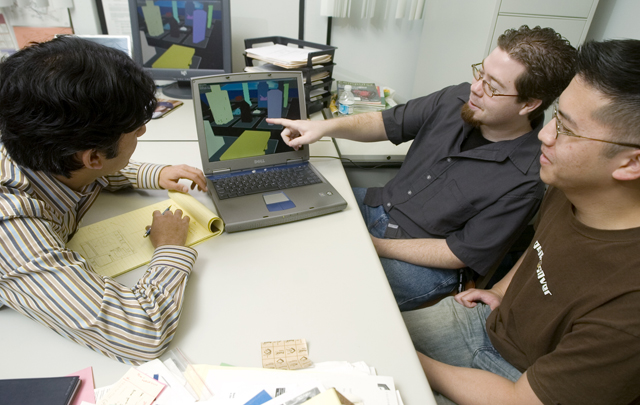 A new scholarship has been established in memory of Professor Emeritus Bruce Hillam, one of the founding members of the Department of Computer Science.

The BBH Scholarship, which covers the cost of tuition and fees for the upcoming academic year, will be awarded for the first time this spring to an eligible student who might not be able to study full-time at Cal Poly Pomona without a scholarship. Students from all science disciplines are eligible to apply, with computer science students encouraged to do so.

Hillam, a 30-year employee of the university, died in late December at the age 65.

“The scholarship is only a small aspect of Bruce’s legacy and commitment to the campus,” says Craig Rich, associate dean of the College of Science.

Hillam, who received his emeritus award in 2003, joined the mathematics department at Cal Poly Pomona in 1973 after earning his doctorate in math from UC Riverside. During the late ’70s, he was one of the first professors to teach computer science courses at Cal Poly Pomona. The computer science department was officially formed in 1981, and Hillam served as chair from 1982 to 1992.

He is also remembered for his efforts outside of the classroom. Hillam, who became a quadriplegic from a diving accident at 16, was a strong proponent of accessibility and urged compliance with the Americans with Disabilities Act at the university. Additionally, he was instrumental in the creation of the university’s four-year pledge, in which a student commits to balance school and personal life to ensure timely graduation, and the university ramps up advising and facilitates registration.

The deadline to apply for the BBH scholarship is April 26. The scholarship winner may reapply in subsequent years.

The application can be accessed at https://scholarships.dsa.cpp.edu/STARS/Default.aspx.

By completing the application, students will be considered for the BBH scholarship as well as for other scholarships throughout campus for which they might qualify.