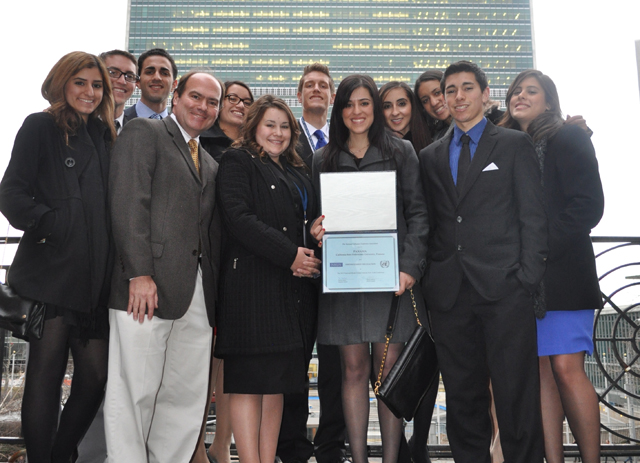 The 11-member team represented the Republic of Panama during the National Model United National Conference. Eight members were competing for the first time.

The College of Letters, Arts, and Social Sciences is holding the 2nd Annual National Model United Nations Reunion and Fundraising Dinner, Friday, May 3, at The Restaurant at Kellogg Ranch.

The event will begin with a cocktail hour at 5 p.m., followed by dinner at 6 p.m. Tickets are $100 each and proceeds will go to benefit the Model United Nations program. For more information, contact Cathy Lopez at (909) 869-4299 or cclopez3@cpp.edu.

Professor Jerry Pubantz will deliver a lecture immediately preceding the fundraising event. Pubantz is the dean of the Lloyd International Honors College at the University of North Carolina, Greensboro, and he has served as president of the National Collegiate Conference Association, the board that administers the National Model United Nations conference. The lecture will be held from 3:30 to 4:45 p.m. at the Collins College of Hospitality Management, Building 79A-1263.