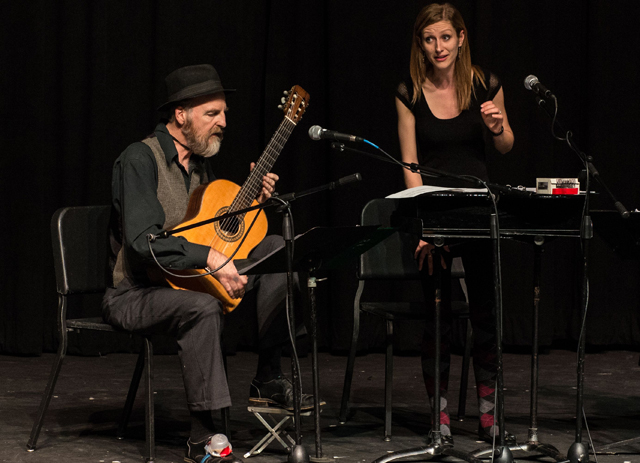 The music department’s Spring 2013 Guitar Festival will feature a number of talented musicians playing and singing everything from jazz-based works to musical narratives, with pieces as old as the 16th century and as recent as a premiere performance. The festival includes three concerts and one free guitar workshop.

Guitar Professor Peter Yates, who organized the events, says the combination of guitar and vocals fits together naturally.

“It produces an intimacy and transparency of expression that is flexible and special,” he says. “Compared to other performance mediums, it’s like a sports car – capable of swift stops, turns and stops – exciting to drive.”

The first performance, “A Range of What Is Possible,” will take place at 8 p.m. on Wednesday, April 17, in the Music Recital Hall. It will feature ensembleFRET, a performance collective formed by Yates, music department faculty member Buzz Gravelle and guitarist Walter Marsh.

The second event of the series, GuitAria, will showcase collaboration between Yates and mezzo-soprano Alex Grabarchuck. Yates hopes it will highlight songwriting’s 1,000-year history. Yates will play guitar, percussion and the arpeggione, a bowed instrument that looks like a guitar-cello hybrid.

The event will also premiere Yates’ new song cycle, “One Step Outside of this Gazebo,” which he describes as narrating a diva’s journey “from charismatic self-absorption to awareness of life and mortality.” It will be held in the Music Recital Hall at 8 p.m. on May 1.

As part of the department’s “Year of the Alumni,” the electric guitar-themed chamber group The Los Angeles Electric 8 will perform a repertoire of classical music spanning from the late Renaissance era to the present day.

The group features two Cal Poly Pomona alumni, Felix Salazar (’03, music), the director; and John Trotter (’06, music), guitarist. They will perform in the Music Recital Hall at 8 p.m. on Wednesday, May 15. A free guitar workshop will precede it from 4 to 6 p.m.

Tickets for each show are $15 for general admission and $10 with a student I.D. and may be purchased online at www.csupomona.tix.com or at the Music Box Office 12 to 1 p.m. Monday through Friday and one hour before showtime.