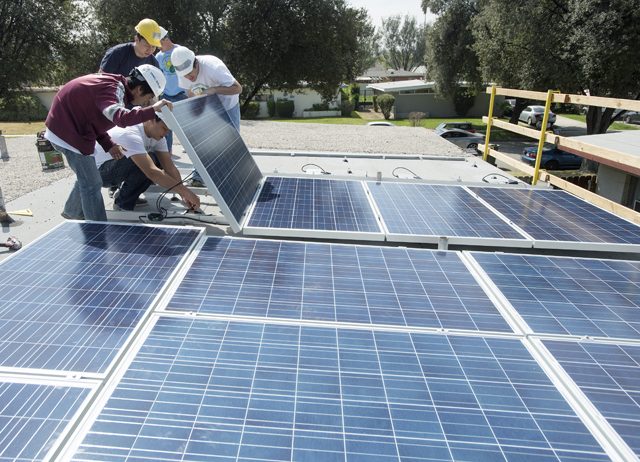 While some students spent spring break sleeping in, hanging out with old friends, or taking trips, Billy Wong was scrambling around on roofs, hooking up wiring and installing solar panels for needy families.

Wong is an electronics and computer engineering technology student and one of the founders of Cal Poly Pomona’s GRID Team. It’s a group of about 30 students that works with GRID Alternatives, a nonprofit that aims to bring solar power to low-income households. The team’s first meeting was barely a month ago, but members are already making a difference in local communities.

The goal is to promote the use of renewable energy while also easing the financial burden faced by these families — a solar panel installation can reduce their electric bills by as much as 80 percent.

The program was a perfect fit for Wong. He has been interested in solar power since his high school days when he bought solar cells online and soldered them together while sitting next to his parents as they watched TV. The makeshift setup was able to power his computer and a lamp, he says.

“It was pretty crude, but it worked,” Wong says.

Since then, he’s made improvements to his system and it’s now capable of powering both his and his brother’s rooms.

That passion for solar power was sparked again when he heard that GRID Alternatives was looking for students to install solar systems. Wong decided to organize a campus team to help out.

“We would give back to the community — help a family out — while at the same time learning,” Wong says.

Wong found a champion for the project in Gerald Herder, a faculty member in the Department of Engineering Technology. Herder provided financial backing to the students, matching them dollar for dollar to raise the $150 needed per student to cover the costs of tools, equipment and insurance.

“I was looking for a technical service project, which are very hard to find for engineering students,” Herder says. “It’s nice when they can have a project that not only does community service, it helps them technically.”

SCETA President Edgar Lozano says the GRID Team gives engineering students a chance to gain experience in a field that’s almost certain to grow in importance, pointing out that Cal Poly Pomona has solar panels on its gym, in parking lots, at the Lyle Center, and on recycling bins.

“[Solar] is all over the place,” Lozano says.

Abey Varghese, a member of the GRID team, agreed.

“It’s something that’s not going to die,” Varghese says. “It’s growing for sure.”

The GRID team ultimately grew to include 29 members, far more than the eight to 10 most teams have, Wong says. The team’s large size allowed it to tackle two project homes during spring break, one in Loma Linda and one in Redlands.

GRID members described the experience as at times being nerve-wracking (clambering along steeply sloped roofs), frustrating (they accidentally wired one system backwards), but very rewarding. One of the homes was owned by a young couple who told the students the money they will save on electricity will help them start their family.

“The wife came out; she started to cry,” Varghese says.

Jose Valdivia, another GRID member, says he enjoyed the challenge of putting knowledge he gained in the classroom to work in the real world.

“It’s not an easy task,” Valdivia says. “You can really see how much work, how much effort it takes.”

Wong says that he hopes the successful debut of the GRID Team will mean many more projects in the future.

(Photo: the GRID team installs a solar panel on the roof of a home.)