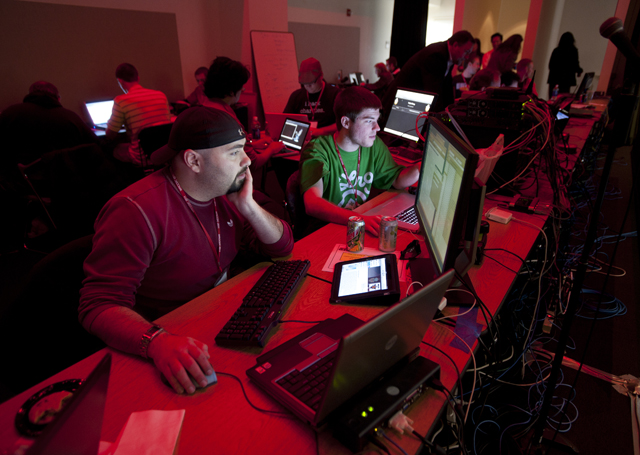 Cal Poly Pomona edged out UC Berkeley in a cyber-defense competition during spring break to win its fifth consecutive regional title. The eight-member team will compete in the national round later this month in Texas.

More than 100 students competed this year in the Western Regional Collegiate Cyber Defense Competition, which included teams from the University of Southern California and Mt. San Antonio College. Students teams worked together to protect a computer network from a barrage of cyberattacks over the course of three days.

The Cal Poly Pomona team included students from the business administration, science and engineering colleges. Students prepared for the competition throughout the year, giving up their Saturdays and summer break for the chance to be one of the best collegiate teams in the country. In the National Collegiate Cyber Defense Competition, they will compete against 10 teams, including perennial powerhouse University of Washington.

“There is a true camaraderie among team members that, when coupled with their diverse skill sets, makes the team very competitive,” says computer information systems Assistant Professor Ron Pike, who coaches the Cal Poly Pomona team. “I am proud of the strong performance the team put together and thrilled that we will now have the opportunity to move to the national competition.”

During non-competition hours, the competitors met with and learned from some of the most influential leaders in cybersecurity. Howard Schmidt, President Obama’s former cybersecurity czar and co-founder of Ridge Schmidt Cyber, delivered the keynote address. Niall Browne, chief security officer and vice president of security at Workday, also met with competitors.

Below is a video of Schmidt’s remarks at the competition.