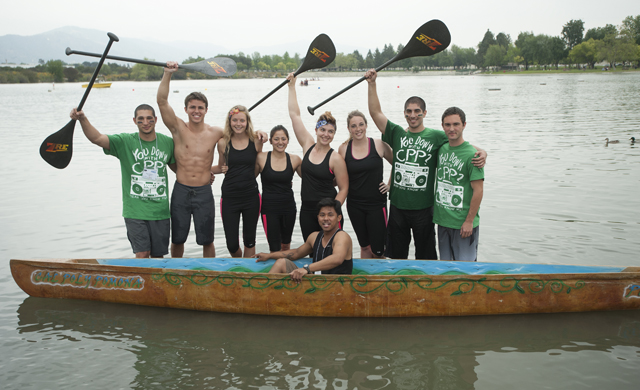 When people hear that Cal Poly Pomona students have built a concrete canoe, one of the first questions they inevitably ask is, “How does it float?”

It’s a question that puzzles Steven Saleh, captain of the concrete canoe team.

“Airplanes weigh tens of thousands of pounds, but they fly,” Saleh says.

Planes owe that ability to their tough, but light construction. It’s the same model used for the concrete canoe.

Cal Poly Pomona’s canoe incorporates steel “tendons” and carbon fiber for extra strength, and it is injection molded, allowing for a thinner and more sturdier construction.

“We pumped our canoe,” Saleh says. “We’re the first school and the only school that does this.”

Even the concrete it’s made from is relatively featherweight. A chunk of it will float on water, Saleh says.

Cal Poly Pomona’s canoe is a far cry from an airplane, but it practically flies like one — it recently took first place when Saleh and the rest of the concrete canoe team faced off against 16 other colleges and universities in a series of races at the Santa Fe Dam in Irwindale.

The races were just one portion of the Pacific Southwest Conference, an event hosted by the American Society of Civil Engineers in which students compete both physically and academically. In addition to participating in the race, the students must prepare a report on their project and present it to a panel of judges. That was far harder than paddling around a lake, Saleh says.

“The whole presentation aspect really gets you nervous,” he says.

But whatever fears he might have had were allayed the moment the judges set eyes on Cal Poly Pomona’s canoe.

“One of the judges said, ‘You set the standards for the other schools’ canoes,’” Saleh says.

Together with its race performance, Cal Poly Pomona’s scores in the academic areas put it in second place for the western region, and allowed it to move on to the national competition, which will be held in Illinois in June. This is the latest of several times the team has made it to the nationals. It placed seventh last year, and fourth the year before that.

“That’s our graduation present,” Saleh says. “Now it’s just a matter of perfecting everything.”
It’s also the result of months of hard work. The team began constructing the canoe last summer and has been out on the lake practicing for the race since September.

“We went out almost every weekend and we paddled and we practiced and I’ve been sore for months,” says Gabriella Garcia, a civil engineering student and member of the team.

Other team members said they’ve enjoyed the experience of applying lessons from class to the real world.

“You really learn a lot of things from class, and you get to apply them here,” Hisabeck says. “We just make magic happen.”