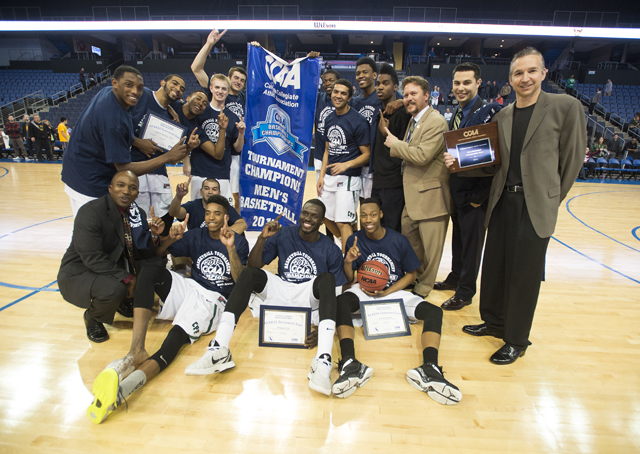 The men’s basketball team is headed to the NCAA Tournament after winning the California Collegiate Athletic Association championship this past weekend.

The Broncos defeated San Francisco State, 60-54, in the semifinals of the CCAA tournament at Citizens Bank Arena in Ontario on Friday night, and then vanquished Chico State, 78-64, in the championship game on Saturday night. The team improved its record to 27-2 and is ranked fifth nationally.

With Saturday’s victory, the team earned the No. 2 seed in the West Region as the Division II postseason field was announced Sunday night on the NCAA.com Selection Show. It will mark the 10th time the men’s team has played in the tournament.

The No. 2 seed is the highest in program history, and now the Broncos will get a rematch with seventh-seeded Chico State in the first round. It will be the fourth time the teams have played this season. The date and time of the game, which will be played in Bellingham, Wash., has yet to be announced.

“We’ve earned the No. 2 seed, and I’m very excited for our team,” Coach Greg Kamansky said. “This is a whole new season, and I know we’re all very anxious to get going.”

The Broncos have taken three postseason trips to Bellingham during Kamansky’s tenure and have gone 8-0 through those matchups in the 2004-05, 2008-09 and 2009-10 seasons. The Broncos are 21-8 all-time in the Division II Tournament.

The team continues to collect honors. Mitchel Anderson and Greg Kamansky were named the CCAA’s Most Valuable Player and Coach of the Year, respectively.

Playing in his 10th and final CCAA Championships tournament game, Anderson set conference tournament records for career points and rebounds with totals of 122 and 53, respectively.

Joining Anderson on the All-Tournament team were Mohamed Fall and Terrence Drisdom.

To view video highlights of the Broncos’ victory on Saturday over Chico State, click here.