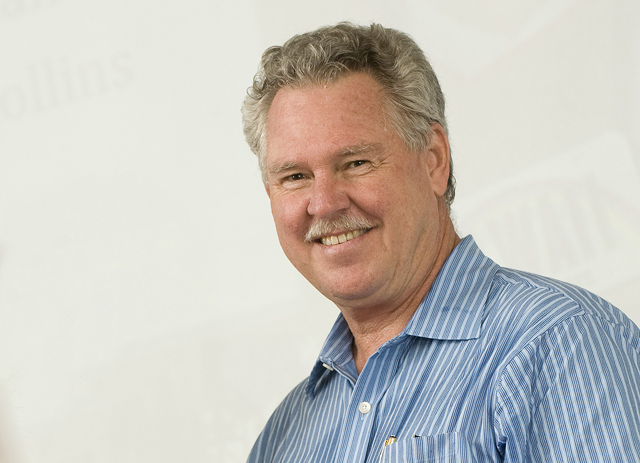 After more than three decades of service to the university, Vice President for Administrative Affairs Ed Barnes says it’s time to move on and pursue some of his other passions.

“My son asked, ‘What are you going to do with yourself?’ I told him, ‘I’m going to do whatever I want, whenever I want,’” Barnes says with a laugh. He plans to revive the air-brush art studio he had in his 20s, and he’d like to expand his woodworking shop at the home in Claremont where he and his wife, Denny, have lived for 28 years. Trips to Eastern Europe and sub-Saharan Africa are also on his to-do list.

“His leadership has been invaluable, helping the university navigate through one of the most difficult financial periods in our campus history while instituting a transparent budgeting process,” Ortiz says. “No matter what the university has asked of him, Ed has done an extraordinary job.”

Between now and Dec. 1, the day his retirement takes effect, Barnes has a full plate of responsibilities on campus — the behind-the-scenes duties of a chief financial officer that are essential to the university community. Foremost are some key infrastructure improvements, as well as the ongoing financial challenges that reached crisis proportions in 2009 when the state suddenly slashed funding to the CSU by 22 percent.

“The good news was that this was one time when my crystal ball had some clarity,” Barnes says, pointing out that he foresaw the possible ramifications of the housing bubble, which burst in 2007 and dragged the economy down with it. “I thought, what is this going to mean for California and for funding for public higher education? It was tough for me to convince some of my colleagues to focus on survival, but we did to good effect.”

The simple act of requiring a vice president’s signature for any expenditure over $1,000 trimmed such requisition costs by $7 million the first year. Travel was strictly limited to business-specific trips, and hiring was restricted to mission-critical positions. Furloughs, enacted in 2009 to help the university weather the shock of the cuts, staved off draconian cuts. The passage of Proposition 30 last fall offers hope that the CSU’s worst financial days are behind it, but Barnes says diligence is necessary and ongoing.

“We really had to hunker down, but I’m proud of the way we handled it,” Barnes says. “I’m also proud of other things that have been accomplished in my time here.”

Some of those things – road improvements, electrical substation overhauls and water reclamation projects – can go virtually unseen by the public, but others, such as Agriscapes, the Farm Store, Innovation Village and what is now the John T. Lyle Center for Regenerative Studies, are part of Barnes’ legacy.

“I’ve known Ed since I arrived 18 years ago, and he’s been terrific to work with,” says Paul Storey, director of the Cal Poly Pomona Foundation. “He really knows how the university works, and he was a real leader on the Innovation Village project.” (Innovation Village, the brainchild of former University President Bob Suzuki, now houses Southern California Edison and the Red Cross. It provides opportunities for research collaboration, internships and a steady revenue stream.)

Barnes’ career at Cal Poly Pomona began in 1981 as an assistant professor in the College of Agriculture. He had just earned his Ph.D. in soil science at the University of Hawaii, where he proved proficient not only as a researcher, but a surfer, finding as much free time as possible to polish his longboarding skills.

“He was a welcome addition to our program,” says Les Young, dean of the College of Agriculture, who was a member of the faculty back then. “We knew Ed was destined for better things. … He was young and fresh, ambitious and very smart.”

Barnes’ life as an administrator began the day he set foot on campus, when he became responsible for managing parts of the college’s farming operation in addition to teaching. His time in the classroom, however, was brief. Soon, he was off to Yemen as part of an international consortium on growing citrus. He returned a month later, wrote a proposal based on the group’s work, and secured a $14.5 million government grant to fund further research at Cal Poly Pomona. It remains the largest single grant project in the university’s history.

Although he returned to the classroom only briefly in the early 1990s, Barnes says he has deep respect for the faculty.

“I give great credit to those who engage students and stay abreast of their field. They have to be out front all the time. They’re at the heart of the university.”

He also has great respect for the team of managers and professionals he has assembled.

“I’ve worked really hard over the years to build an organization where I have good people in key places, and they all do their jobs really well. I get the opportunity to set the tone and leadership style, and they make it happen.”

Joice Xiong, director of internal audits, has known Barnes for nearly 10 years. She says he has empowered his staff to challenge the status quo, which fosters collegiality and encourages problem-solving.

“He’s very open-minded, willing to hear all different opinions, good or bad. I’ve seen him make employees feel very comfortable to express their opinions,” Xiong says. “It’s hard to put into words about what he’s meant to me professionally. He’s a real person, and he will be truly missed.”

Barnes says he will leave with a buoyant optimism about Cal Poly Pomona’s future. “We have one of the gems in the entire Southern California area. We’ve been the best-kept secret for the longest time. We offer fantastic quality programs. Ask the employers who they hire,” he says sweeping his hand toward the university from his sixth-floor office.