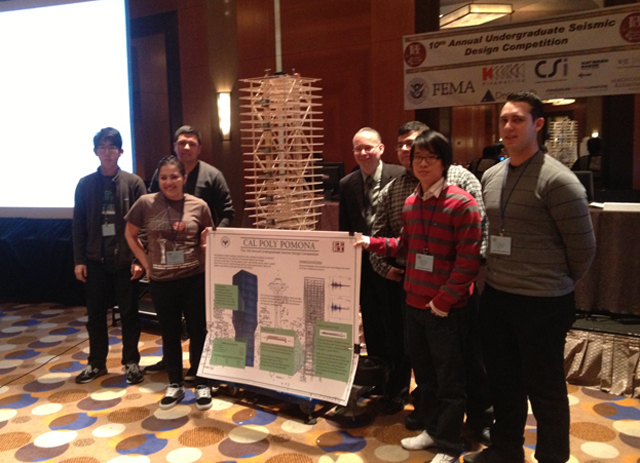 When a group of Cal Poly Pomona students traveled to Seattle in February to take part in the annual Undergraduate Seismic Design Competition, they found themselves face to face with some stiff competition — UCLA, Stanford, Notre Dame and Brigham Young University were among those in attendance.

But if you think the members of the university’s Seismic Design Team were about to let some big names shake them to their foundations, you would be wrong.

“We’re kind of looked upon as the underdogs, but they don’t realize how good we are,” says team captain Karla Martinez, a sixth-year civil engineering student.

Cal Poly Pomona’s team placed fourth out of the 36 universities and colleges that participated in the event, which requires teams to construct a scale model of a skyscraper from thin pieces of wood resembling matchsticks and then subject it to simulated earthquakes.

The first earthquake is designed to mimic 1994’s Northridge earthquake, which caused widespread damage throughout the Los Angeles region. The second is modeled after the 1940 El Centro earthquake, which damaged as much as 80 percent of the buildings in Imperial, Calif.

If those weren’t enough, the test includes a third earthquake fabricated by the event organizers.

“The obvious goal is to ensure that the building doesn’t collapse, but the competition takes other factors into consideration as well,” Perez says. The buildings are outfitted with sensors that measure how well they dampen the violent shaking, the amount of floor space available and their architectural aesthetics — all vital components of a real-life building. The students are also expected to predict how their building will perform.

“This competition allows undergraduate students to get exposed to earthquake-resistant design,” Perez says.

Perez proudly recounts how this year’s team developed an innovative strategy for keeping their building upright during the quakes, ironically by giving it less-than-solid footing.

“They used syringes,” he says, explaining that they were part of the structure that flexed and absorbed earthquake jolts without transmitting them to the upper floors.

They also designed pieces of the building to break during an earthquake. Those pieces would save the rest of the structure by sacrificing themselves.

“The idea was to design these sacrificial braces to snap and release some energy, helping to preserve the structural integrity of the remaining components,” Perez says.

If they hadn’t been dinged for some technical errors, the team probably would have done even better than fourth place, Perez says. He credited the university’s learn-by-doing approach to education and the hard work the team members put into their project.

“We are a school that’s obviously hands-on,” she said. “Being part of this club you really get to see things you would never learn in a class.”