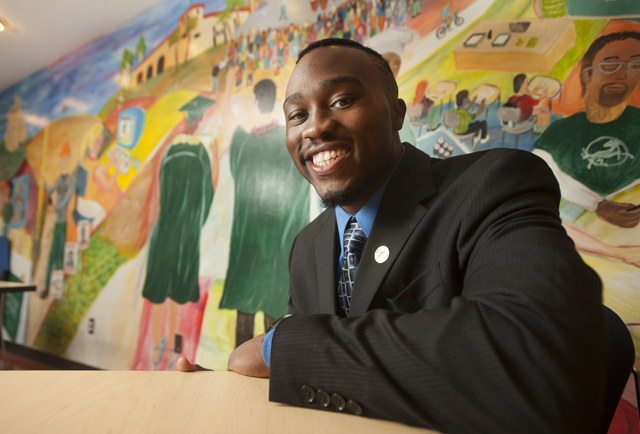 There’s hardly an on-campus position that ASI President Chris Osuala hasn’t held at some point during his time at Cal Poly Pomona.

Osuala served as a diversity ambassador, a Black History Month chair, a Welcome Week leader, a math tutor, an intern at Edison, a volunteer with the Prison Education Project and president of his fraternity before being elected to lead student government. Recently he was recognized by the Access and Disability Alliance as a Diversity Champion for his work with the Black Faculty Staff Association.

He has come a long way since he arrived on campus in 2007.

“When I was a freshman, I would have never, ever expected to run for ASI president,” he says. “I didn’t even know we had a president of this school. It wasn’t even on my mind.”

Osuala’s path to Cal Poly Pomona has not been conventional. At age 10 he moved from California to Nigeria when his father was elected to that country’s House of Representatives.

When he moved to Houston three years later, his transition back to the American school system was far from seamless.

“High school is a brutal place, especially if you didn’t go to middle school with the same people. Everyone’s already formed their cliques. And I had a new accent. People were looking at me differently like, ‘Where did you come from?’”

During his junior year, Osuala became more involved in clubs and sports to beef up his college applications, and soon found himself making friends.

Osuala hoped to return to California to get his degree in electrical engineering like his father, and he asked his aunt to recommend some good engineering schools in the area. She’d heard a lot about Cal Poly Pomona, and her glowing description convinced him that he should apply.

Going to an out-of-state college gave him the opportunity to live on campus, which he embraced.

Part of that experience involved joining as many clubs as he could, frequenting the cultural center, and joining a fraternity.

Along the way he conquered life-long stage fright by performing spoken word poetry in Ursa Major at “The Show,” a student talent show.

Osuala started writing poems when he was 12, but bad memories of an elementary school talent show performance kept him from taking to the stage. While miming at playing piano and singing along to Elton John’s “Candle in the Wind,” his background CD started skipping.

“It wasn’t funny in second grade,” he says laughing. “But it’s hilarious now.”

These days, he speaks and performs in front of large crowds regularly.

Osuala is sure that the experiences he’s had here could not have been duplicated at any other university, and he is grateful for all of them.

“I love Cal Poly. I’ve had so much growth here. When I go to conferences, I’m always bragging about my school, telling other students, ‘You don’t even know what you’re missing.’”

His school spirit is part of what inspired Osuala to run for ASI president: It was a chance to give back to the university that molded him.

His platform while campaigning with running mate Christine Hall reflected this, highlighting the promotion of school pride, publicity for Cal Poly Pomona’s hands-on programs, and promotion of ASI.

“I was going out there and trying to meet as many people as possible, going to all of the different council meetings and talking to them, trying to show them what I was about.”

He also managed to take 21 units and earn one of his highest quarterly GPAs ever, a 3.6.

“I was literally living out of my car for those three weeks,” Osuala says. “I had different outfits in the car for different events. I would go to where I was parked, get in my car and change really quick, and then head to another event. It was super hectic. I don’t know how it all happened, but it happened.”

The stresses of the campaign and the heavy workload of an ASI president have taught Osuala a lot about time management. Rather than giving up on sleep, social life or responsibilities, he found he could accomplish a lot more just by streamlining his schedule.

“I cut out a lot of the fat. I don’t have time to waste. I have meetings and class and work all day, and I need to find time to do my homework, so the time I would have spent just lazing around or watching TV, I can’t do that. I don’t even own a TV anymore.”

Osuala’s workload has been particularly hefty. During his term several propositions important to the CSU were put to a vote, the student success fee was proposed, and voter registration occurred – events that required a lot of heavy lifting.

Osuala is also closing in on graduation, and the idea of leaving is strange to him.

“This is my home, you know?” he says with a sweeping gesture that encompasses the whole university. “This is what I know. I have a family here. I love Cal Poly. So to imagine leaving and not coming back is weird.”

Still, he knows his experiences have prepared him well for the workforce.

“The boy that came here September 25, 2007, and the man who is going to graduate June 15, 2013, are completely different people. Cal Poly helped me grow into the person I am today.”