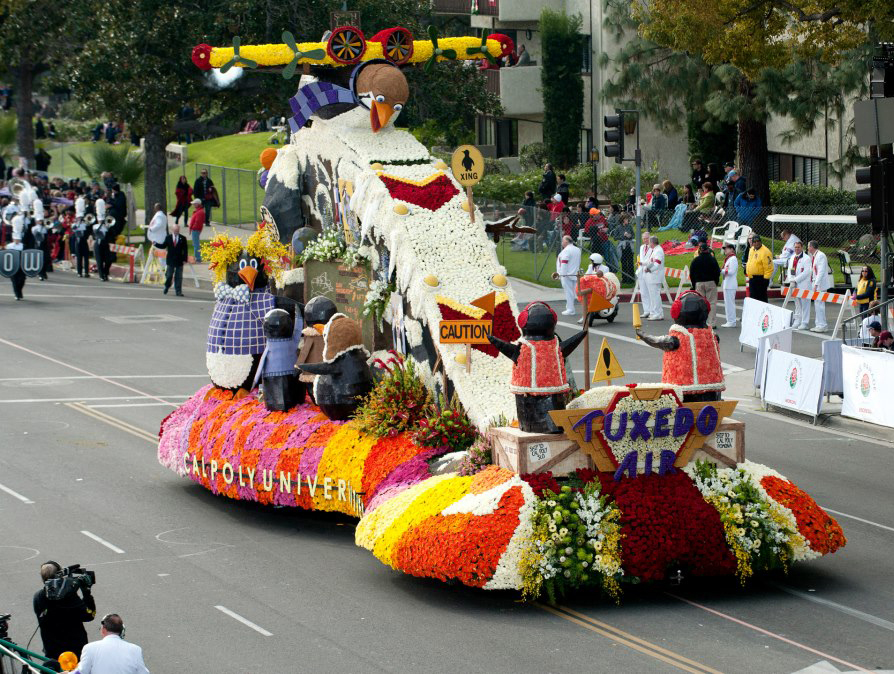 The Cal Poly Universities need to find more space on the mantle – or maybe they should get another mantle. For the 51st time in 65 years, the only student-built float in the Rose Parade earned an award, this time the Bob Hope Humor Trophy, which recognizes the most comical and amusing entry.

“Tuxedo Air” played off the parade theme “Oh, the Places You’ll Go!” to perfection: Cuddly penguins tried their hardest to figure out how to take to the air with the help of engines, artificial wings and a ski-jump ramp. It was a favorite not only with the judges but with the tens of thousands of people who lined the 5 1/2-mile route of the 124th Rose Parade.

The Cal Poly student section cheered and hollered the loudest for their favorite float – fitting recognition for the small army of students who collectively put in tens of thousands of hours in the past year designing, welding, fitting and shaping it.

“Being awarded the Bob Hope Humor Trophy is a testament to the students’ hard work and passion to create something wonderful,” says Greg Lehr, the rose float director at Pomona. “Their success adds to the legacy of excellence that began six decades ago.”
In the years since the first float, “Childhood Memories,” rolled down Colorado Boulevard in 1949, the Cal Poly Universities have been innovators and crowd-pleasers. They were among the first to use computer-controlled animation and hydraulics, and their creations have earned a bounty of awards for humor, fantasy, popularity and beauty.
Work on “Tuxedo Air” began as it had with previous floats: In January, before the flowers on last year’s entry were even wilted, the Tournament of Roses announced the upcoming parade theme and sought submissions to match it. “Tuxedo Air” was selected from among 128 entries submitted to the Cal Poly Universities by students and alumni.
Working 250 miles apart, students then began the long process of bringing the concept to life. In the fall, the San Luis Obispo team brought its half to Pomona, where it was joined with its counterpart. Putting to practice the universities’ learn-by-doing credo, students honed skills applicable to their field of study and developed new ones that put them outside their comfort zones. Business majors learned to weld, engineers practiced marketing, and communications students figured out how to barter for much-needed materials.
The pace picked up considerably in December, leading to the annual move-out celebration shortly before Christmas in which the nearly completed float was slowly driven to Pasadena, where flowers and other vegetation were added. The Cal Poly entry was one of only two designated a “Californian Grown” float, marking the fact that at least 85 percent of its materials were produced in the state, including some grown at the university campuses.
“We think it’s important that the Cal Poly Universities, whose legacy is steeped in agriculture, return to their roots,” Lehr says. “Agriculture remains a significant part of the state’s economy, and by using California flowers, we shined a light on that fact.”
Lehr, who along with his students put in many 18-hour days in the frenetic weeks leading up to the parade, says he has one thing on his agenda when he gets home.
“Sleep.”

To view more images from the parade, visit the university’s official Facebook page at www.facebook.com/calpolypomona.