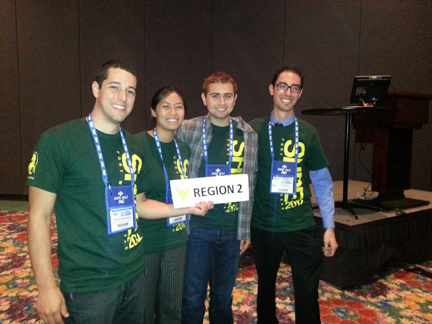 Members of the Society of Hispanic Professional Engineers (SHPE) have placed third in the Academic Olympiad, an event that drew dozens of teams to the organization’s national conference in Fort Worth, Texas. In addition, the Cal Poly Pomona team placed first in a writing test that was mandatory to qualify for the event.

As part of the Distinguished Lectures portion of the conference, Cordelia Ontiveros, associate dean for academic programs and student services in the College of Engineering, talked about “Inspiring and Engaging the Next Generation in STEM.”

“Universities from around the country were extremely impressed with Cal Poly Pomona’s programs to inspire young people to improve the world around them by pursuing a career in engineering,” Ontiveros said.

Students Cindy Khov, Richard Alcala and Michael Alio presented posters and a paper at the conference, which took place in late November.

Thousands of students attend the annual conference, the largest technical and career conference for Hispanics in the United States.