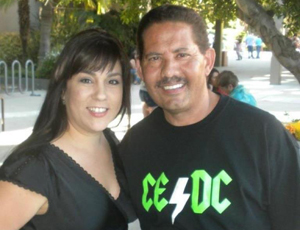 The decision was always easy for Lisa Martinez.

When she learned that a father in her daughter’s dance studio needed a kidney transplant, she immediately checked to see if her blood type was a match. Martinez, an administrative support coordinator in the College of Business Administration, had known Keith Chustz and his family for only a few months, but that didn’t make a difference.

“If somebody needs help, you do it,” she says.

From the moment Martinez called Chustz’s wife, Sheri, to tell her that she and Chustz shared the same blood type, Martinez was fully committed to being a donor. She never hesitated, never doubted that this was what she had to do. Although she was scared at times, Martinez knew that Chustz was spending nine hours a week receiving dialysis treatment that left him exhausted and missing important events in the lives of his three children. She had to help.

Martinez says it’s hard to explain why she felt so confident about donating an organ to a man she hardly knew. She is spiritual person who believes that she was meant to cross paths with the Chustz family.

She also knows what it’s like to face adversity.

Martinez has been a single mom since she was 20 years old. At various times she struggled to pay the bills and put gifts under the Christmas tree. After the housing market tanked, she was laid off from her job at a construction company and was unemployed for two years before she started working at Cal Poly Pomona.

She knows that acts of kindness both big and small have made an impact in her life. She felt it was her turn to pay it forward.

She is the first to admit that the surgery and recovery process wasn’t easy. She was nauseated immediately after the surgery and was on bed rest for several weeks. Although doctors told her she would be tired, Martinez was surprised just how exhausted she felt. She could never stay awake long enough to watch a movie on television, let alone complete a simple household chore. She returned to work in September but occasionally gets pain in her abdomen from the scar tissue caused by the surgery, and doctors tell her it could take up to a year before she is fully recovered.

“It was not a walk in the park, but I would do it again,” she says. “Just seeing Keith thriving and doing so well months after the surgery is worth it.”

“I feel better than I have in years,” Chustz says. “Lisa has given me back the precious gift of good health and time with loved ones. I love Lisa like a sister and she is family now. I am so happy that our families have grown so close.”

When Martinez began the journey of being an organ donor, she thought of it simply as a good deed. She was not expecting to be inspired by others who have shown her love and generosity.

“Doing this has been extremely rewarding,” Martinez says. “I’m a better person because of it.”