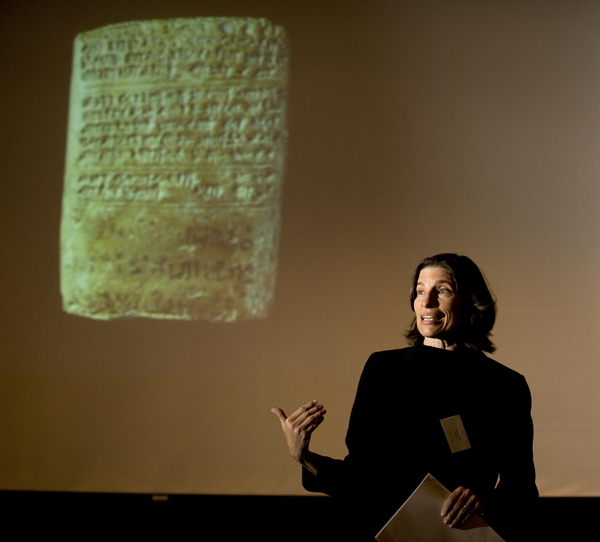 Thanks to Hollywood tales of swashbuckling archaeologists, the study of ancient civilizations is indelibly linked in popular culture to the discovery of royal tombs, golden idols and jewel-encrusted treasures.

In reality, some of the most useful artifacts, at least in the Middle East, are clay tablets documenting the minutiae of everyday life during the Bronze Age — the archaic equivalents of office memos, bills or letters to one’s relatives.

“Some of them are lists of the people working on a job site,” says Cal Poly Pomona History Professor Amanda Podany.

Podany has made a career of studying the clay tablets of Mesopotamia, which are inscribed with cuneiform writing — symbols made of small wedge-like shapes.

“There are hundreds of thousands of documents that survived,” Podany says. “Clay survives very well in the ground.”

She’ll soon have more time to study them because of a research award she’s receiving from the National Endowment for the Humanities. Podany, one of 12 recipients in California, will use her grant to study clay tablets for insights into how the ancient kings of the Middle East interacted with their subjects. She will be on sabbatical in the winter and spring quarters 2013 to work on this project.

The research will be focused on “What did it mean to be a king at that time?” Podany says.

“The kings in Mesopotamia weren’t regarded as gods; they were people,” Podany says.

That’s important because kings from other cultures – Egypt for example – used their presumed divinity to exercise control over their subjects.

If the Mesopotamian kings weren’t considered gods, they must have had some other way of gaining the support of their populations. Podany hopes the tablets will reveal more about that relationship.

Podany says letters the kings wrote to their counterparts in other realms often reveal a lot about their personalities, even thousands of years later. The relationships between the kings were the subject of Podany’s last book, “Brotherhood of Kings: How International Relations Shaped the Ancient Near East.”

“The kings have their quirks,” Podany says. “You can get a sense that this is a real person.”

For example, one Babylonian king often worried about being snubbed, Podany says. At one point, he complained to the Egyptian pharaoh that he felt neglected because he had been ill and the pharaoh hadn’t sent good wishes for his recovery. A messenger had to soothe the Babylonian king’s hurt feelings by reminding him that Egypt was a long way away and that the pharaoh would not have heard of his illness.

But some mysteries about the kings remain, such as their apparent presence in some “surprising circumstances,” Podany says.

In those days, it wasn’t uncommon to find the king’s seal impressed on important legal contracts, such as the donation of land to an employee of the royal court. But other times, the king’s seal can be found on contracts that wouldn’t seem to require it, such as a slave owner freeing his slaves. Podany says some of the kings were known to micromanage their kingdoms.

“It suggests a very direct type of kingship,” Podany says.

Still, the king would have to do a lot of traveling to show up whenever and wherever someone needed a contract approved. An alternative possibility is that his subjects were forced to travel to the capital to take care of business.

Both options would be arduous affairs in those days, so Podany hopes to find out if that’s really how things were done. She’s looking forward to seeing what stories the kings’ tablets will tell her.

Podany says her passion for studying the ancient Near East began with an excavation in Syria. She was present when cuneiform tablets were found in an ancient building, tablets that revealed details about the people who lived and worked there.

“To know that no one between them and me has touched this for 3,700 years — it’s quite mind-blowing, actually,” she says. “It’s almost like bringing someone back to life.”