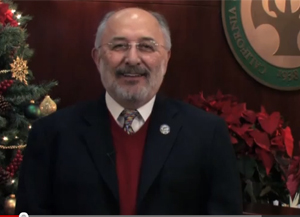 In his weekly video message, President Ortiz reports on the 2013 Rose Parade float, which marks the 65th consecutive year that the Cal Poly Universities have had an entry in the New Year’s Day Parade.

The float is the result of a year-long effort by students at the Pomona and San Luis Obispo campuses involving thousands of hours designing, planning, building, decorating and financing the float. For their efforts, the universities have taken home 48 awards over the years.
The president also talks about how people can donate food and other materials to the project or help decorate the float from Dec. 26 to 31.
President Ortiz is also joined by his wife, Betty, in wishing everyone a happy holiday season.
To read the entire video message, download a PDF of the transcript.