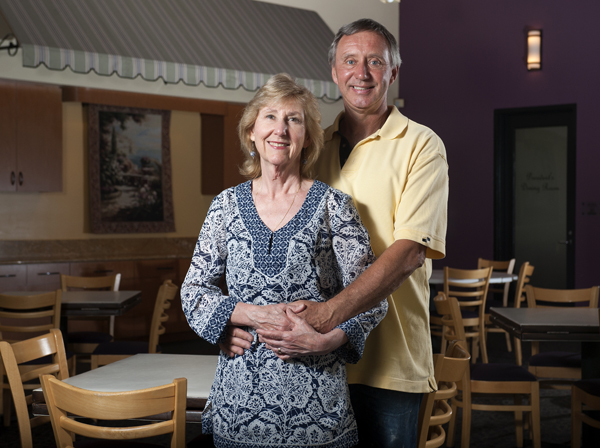 After Barbara Jean Bruin’s mother passed away, the Collins College faculty member and her husband, Marcel, realized they needed a plan for their own assets.

“You could die perfectly healthy, and you should plan for what to do with your resources. If you have a passion, I believe you should give back to that passion,” she says. “I wanted to make sure that if something happens to me or Marcel that everything we have worked for wasn’t for nothing.”

They created an endowment fund that, upon their death, will begin supporting The Restaurant at Kellogg Ranch.

Bruin, who is also an alumna, has taught hundreds of students over the years at the student-managed and student-operated restaurant, and it holds a special place in her heart. They find comfort in knowing that generations of students to come will benefit from this support.

The college gave her so much, Bruin says, including the ability to have funds to leave behind, that she and her husband wanted to give back. Together, they decided that they would support the restaurant in perpetuity.

“Because Cal Poly Pomona gave Barbara Jean the education to be a successful general manager in industry, and that Bob Small truly gave her the career opportunity of a lifetime, I wanted to give back in gratitude,” Marcel Bruin says.

The planned giving program at Cal Poly Pomona helped the Bruins arrange their gift, and it offers alumni, faculty and staff the opportunity to set up a donation to the university. Gifts can be as specific as the Bruins’, or they can go toward a general fund.

“Many people have the desire, whether they are faculty, staff or alumni, to support the university, but they need their assets during their life,” says Dan Wood, director of planned giving in university advancement. “This allows people to make a plan for the university during their life, but the gift doesn’t have to be consummated until their passing. It gives people the ability to give back but within their own financial and planning realities.”

The planned giving program shows people how to do just that through www.polylegacy.com and in-person meetings. Donors can make their choices and see what best fits them and the university.

“They may want to give back but they’re not thinking of the how, and this is a tool to help them do that,” says Gina Johnson, director of major gifts.

Because of the university’s $150 million comprehensive campaign, more faculty and alumni have registered to make donations posthumously. Such giving can be done publicly or anonymously, and Johnson says spreading the word helps build interest.

“It really depends on the donor’s wishes and matching the opportunity and needs of the college,” she says.

For example, Robert Wilson’s planned gift was designated to support the University Library Golden Leaves event, Collins College student scholarships (via the Leonard-Wilson Memorial Scholarship) and the Louise L. Wilson Memorial endowment to support The Restaurant at Kellogg Ranch in memory of his late wife. Chemistry Professor Emeritus Ernie Simpson has designated scholarships in different areas including ones for wine education, women’s basketball and science.

Barbara Jean Bruin believes everyone should plan to give at least a little to a school or a program that has made a positive impact on their lives.

“It’s 20 percent for the tip,” she jokes. “We’re in hospitality. You leave a tip for the person who made the bed up. We thank them for the service they gave us.”

Cal Poly Pomona has embarked on a $150 million comprehensive fundraising campaign to ensure that a quality college education is within reach for future generations of students. The campaign, which recently surpassed $100 million in donations and pledges, will strengthen the university’s ability to provide a hands-on education, to prepare students for the changing demands of the workplace, and to increase research and scholarship opportunities. The fundraising campaign relies on the support of the entire campus community — from alumni to faculty and staff to friends of the university.

For more information about how to support the $150 million Campaign for Cal Poly Pomona through planned giving, contact Dan Wood at (909) 869-4802 or dewood@cpp.edu or visit www.polylegacy.com. All information is held in strict confidence.

A version of this originally appeared in the 2012 fall issue of Collins magazine.