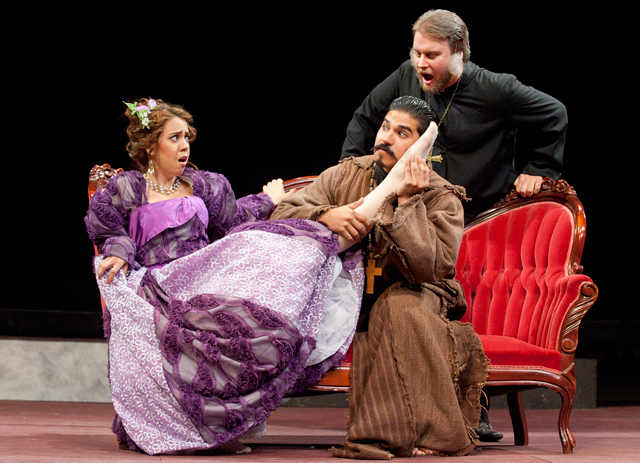 The theatre department presents one of Molière’s most famous comedies, “Tartuffe,” a satirical play about gossip, hypocrisy, wealth and religion. The show will open Friday, Nov. 9 and run through Nov. 18.

The play is centered on the falsely pious leech Tartuffe, who lives off of the generosity of the nobleman Orgon. It follows the difficulties that Orgon’s family faces in trying to reveal Tartuffe’s true nature. The neoclassical play is done in five acts with no change of scenery.

The director of the play, theatre Professor Linda Bisesti, agrees that the play has a naughty side.

“I think the audience will love the fact that Tartuffe is a bit of a bad boy,” she says. “Everyone loves a bad boy.”

The play is also a departure from the department’s usual productions.

“It’s really funny,” says Jessica Gallegos, a fourth-year theatre major and light designer. “I think our department has a tendency to do very heavy plays, and it’s a good change up.”

Molière, a French playwright whose real name was Jean Baptiste de Poquelin, wrote the play in 1664. It was censored almost immediately by King Louis XIV, who admitted that he found it “extremely diverting” but worried about its effect on the general populace. The play was surrounded by controversy, and the archbishop of Paris threatened anyone who read, watched or performed in the play with excommunication from the church.

The play is written in rhymed couplets, which presented a unique challenge to the actors.

“Everything rhymes on stage,” De La Cruz says. “It’s very easy for an actor to fall into what I call a ‘Dr. Seuss’ kind of sound, where you bounce from rhyme to rhyme. That was hard to break away from.”