Main Menu
Browse: Home / 2012 / November / Safety, Housing and Other Topics on the Menu at Pizza Q&A 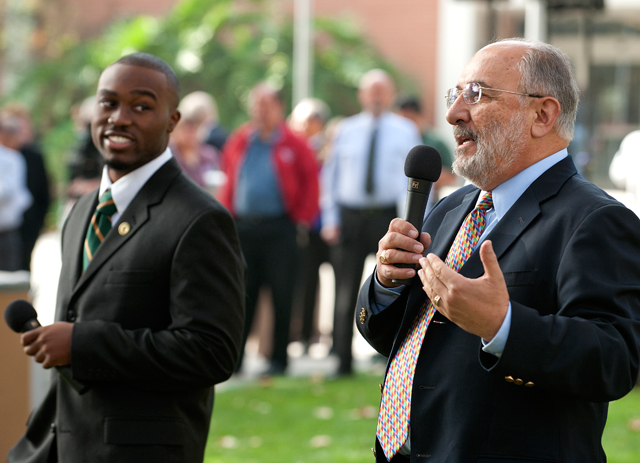 Pizza with the Presidents, the quarterly U-Hour event designed to give students a chance to ask questions of university leaders – and to enjoy some pizza while doing so – covered an array of topics, including campus safety and housing, as well as a reminder that Tuesday is Election Day.

ASI President Chris Osuala encouraged his constituents to vote if they are registered, noting that booths will be set up in the Andromeda Suites at the Bronco Student Center. The ballot contains issues of importance to students, he said, especially Proposition 30. Passage of the measure would trigger a rebate of this year’s 9 percent tuition increase and would lock in the same rate for the 2013-14 academic year.

If California voters reject the proposition, the CSU budget would be cut by an additional $250 million in early 2013. Cal Poly Pomona would bear about $12 million of that cut – roughly equivalent, Osuala said, to the annual operating budget for the College of Engineering.

Osuala was quick to point out that engineering would not be cut $12 million. “That’s my major,” he said with a laugh.

The recent two robberies on campus prompted a question about safety. University Police Chief Michael Guerin said the crimes, particularly the armed robbery of a student inside his room at the Alamitos Residence Hall, were jarring and unusual.

“The nature of the robbery was pretty threatening,” he said. “We take it as a big deal, but we do want to make sure you keep it in perspective,” noting that the university is a safe community with few crimes against people. Two university detectives are working the case full time and are meeting with other police agencies to see if they have experienced similar robberies.

“We’re relying on everybody to be our eyes and ears,” he said, and he encouraged the campus to community to report suspicious activity immediately.

Guerin also addressed auto theft, which he said is down this year, calling the decline “a testimony to the good tips from you.” He noted that auto theft is endemic to Southern California and its car culture, and he pointed out that drivers who park in the Brea Mall stand a greater chance of losing their vehicle to a thief than those who park on campus. 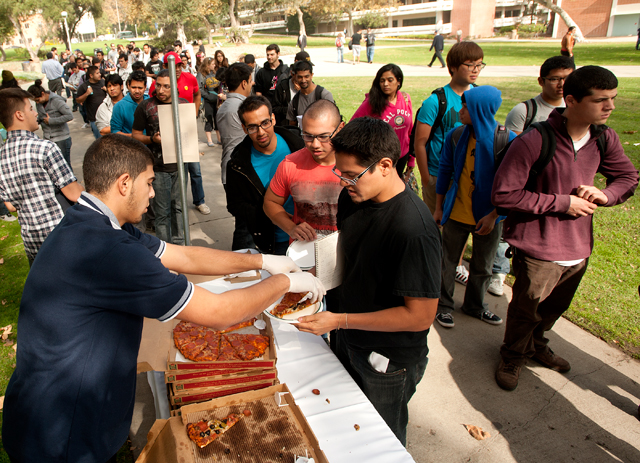 Several questions during the Q&A on Nov. 1 focused on student housing, including whether any plans were afoot for more.

Vice President of Student Affairs Doug Freer said while the university has added significantly to its housing stock in recent years, “we’re still woefully short … we still have a substantial waiting list.” He pointed out, however, that planning for an additional 1,600 beds is underway. The new units, which will likely open in four years, include a new dining facility and will replace the old freshman residence halls.

“We have to try and make accommodations to provide enough housing,” he said. “It’s a matter of time.”

Having more students live on campus is also good for the environment, Ortiz said, because it reduces greenhouse gases and will help the university meet its Climate Commitment to become carbon-neutral by 2030.

The hourlong Q&A also focused on advising, parking, access to classes and budget issues. For a compilation of topics covered, see the Pizza with the Presidents roundup on Storify.