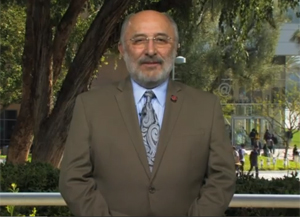 In his weekly video message, President Ortiz reports the university will conduct its quarterly test of the Safety Alert System on Thursday morning. The system, which is part of the campus’ emergency communications plan, will send out brief test messages to email, phones and computers. This quarter, the Safety Alert System includes a new feature called Alertus, which sends out desktop notifications to campus computers.

Other topics in the president’s video message: