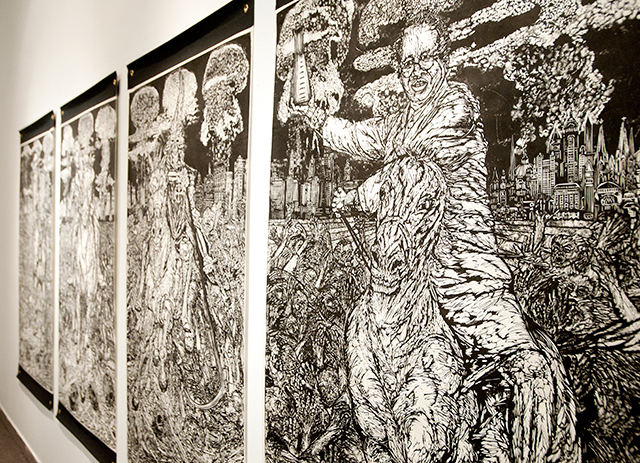 Standing in front of Patrick Merrill’s “Four Horsemen,” the viewer is engrossed by the massive 6-by-12-foot woodcut. The sharp details, deep colors and dark themes of this four-piece magnum opus confirm his status as a master printmaker and mixed-media artist.

For the next month, the W. Keith and Janet Kellogg University Art Gallery will host a retrospective of his work showcasing his body of work that spans 30 years. “Resistance is Hope” will display nearly 100 of Merrill’s woodcuts and inked prints, marked by themes like the psychology of war and the fate of the human race.

Merrill, who died in 2010 at age 61, had deep ties to Cal Poly Pomona. In addition to running a private printmaking business, he became the curator and director of the University Art Gallery in 1997. In 12 years, Merrill spearheaded a movement to elevate the annual Ink & Clay exhibition into a national competition. During his tenure, the gallery also established two major bequests.

After Merrill’s passing from cancer, many colleagues from the art department and the Pomona art community hoped for an exhibition of his work.

“I was thrilled to hear that Patrick’s art was going to be exhibited in the Kellogg Gallery,” says art Professor Babette Mayor, a former colleague of Merrill’s. “Patrick was always thinking about the bigger picture and brought important global as well as regional issues to the forefront at Cal Poly Pomona.”

After the exhibition concludes, some of Merrill’s work will be added to the permanent gallery collection for future exhibitions. Debra Winters, his widow, has been working hard to assist the gallery in presenting the exhibition, says current curator and director Quinton Bemiller.

“Having this show at Kellogg Gallery makes sense,” Bemiller says. “There’s a personal connection to Patrick. We have a tremendous resource of artwork at Cal Poly Pomona, and I am happy that Patrick will be included.”

The exhibition will run from Nov. 8 to Dec. 15. A culminating panel discussion with Merrill’s former colleagues and professionals from the Los Angeles art community will be held on the last day of the exhibition. For more information and gallery hours, visit www.cpp.edu/~kellogg_gallery/gallery1_exhibitions.html.