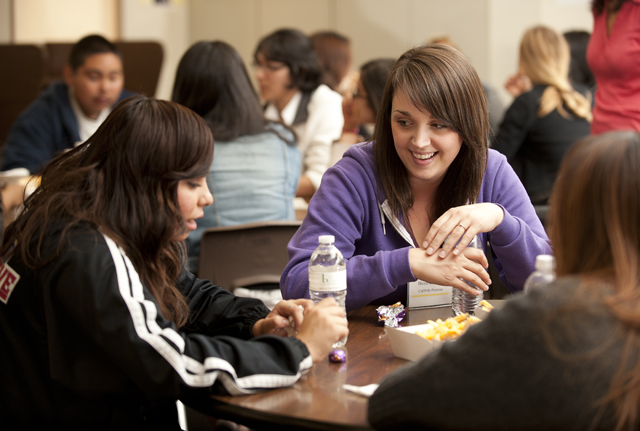 They looked like any other group of teens, sitting around tables in a large classroom, chatting as they ate french fries.

But underneath the conversations, something else was going on: life coaching.

Half of the group was students at Santana High School, a continuation school in Rowland Heights. But the other half was from Cal Poly Pomona’s liberal studies synthesis class.

“It’s essentially an opportunity for students to study public education as an institution and, from a citizen’s perspective, determine the effectiveness of the institution,” Chavez-Reyes says. “This becomes their applied experience, the learn-by-doing portion.”

Now in its second year, the Santana/Cal Poly Pomona liberal studies connection grew out of a previous effort by the nonprofit Buenanueva Foundation to provide mentoring to students at the continuation school. That nonprofit organization later became defunct. But Chavez-Reyes, who had served on its board of directors, saw a learning opportunity for her upper division students, many of whom will go onto educational careers.

The academic coaching takes place in Santana classrooms in group or one-on-one situations. Math and English are the two subjects most in demand for tutoring assistance. Fifteen liberal studies students served as academic coaches this fall.

Students who choose the life coaching option spend 10 hours over six weeks with their Santana counterparts. Chavez-Reyes says many of the Santana students have experienced academic failure or don’t have the skills or encouragement they need to succeed because of their personal circumstances.

“The kids are motivated. They want a lot out of life,” she says. “But they don’t know anyone who can help them get there and give them the kind of guidance and support they need.”

This quarter, 21 Cal Poly Pomona students worked with 20 teens in Santana’s student body government and journalism classes. They shared their life stories, and helped identify positive traits in the Santana students to motivate and build self-esteem. The liberal studies students also coached their high school pupils in life planning and goal setting: how to make decisions, develop and execute a plan, and how to evaluate their efforts.

“I learned more about myself in some of the activities we’ve done – things I’ve accomplished and things I want to do,” says Yasmeen Fregoso, 17, a Santana senior who wants to go into cosmetology and possibly open her own salon. The discussions focus on what she will need to do to pursue those goals, including the kind of education she will need, Fregoso says.

Santana Principal Guillermo Munoz says he has noticed students’ attitudes change as a result of the coaching.

He pointed out some boys sitting at one of the tables. They are less introverted than they used to be, Munoz says.

“I think it’s a result of the rapport and engaging in dialog,” he says. “They feel it’s safe to participate without ridicule or judgment.”

For the Cal Poly Pomona students, the experience opened them up to different perspectives.

Amber Yoshioka, 23, a liberal studies senior, wasn’t sure at first what to expect from the Santana students. But she soon discovered they weren’t that much different.

“They’re very much like us,” she says. “Maybe they had harder circumstances growing up, but they’re definitely relatable.”

Yoshioka, who wants to go into elementary education, says the experience with the Santana students showed her what could happen to the schoolchildren she wants to teach. She hopes she can help them avoid some of the pitfalls and has already thought about what she would tell them.

“Stay in school. Be focused,” she says. “Work hard. Don’t do parties on the weekends. School comes first.”

For her part, Fregoso says she is looking forward to meeting the next group of liberal studies students during winter quarter.

“If I end up going to Cal Poly Pomona,” she says, “I’ll end up knowing some people there.”