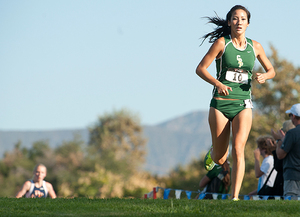 She ascended the ranks of Division II through her Bronco career, placing 72nd at the 2010 championships in Kentucky and taking 36th at last year’s race in Washington. Dinh is just one of three CPP student-athletes in program history to reach All-American status with Joann Howard (1985) and Kellie Taylor (1990) winning the honor previously.

“It’s all still hard to believe,” Dinh said when asked to reflect on her four years leading the Broncos’ cross country program. “I came in as an average runner but I set goals from the beginning that I knew would take a lot of work. The coaching staff believed in me and helped me get to where I’m at now. I’m really happy how it’s all worked out.”

In working her way through the 6,000-meter course in Joplin Saturday, Dinh ended up crossing the line with a time of 21:06.8. That fell just 12 seconds shy of her personal best, which she set at the start of the 2011 season in Riverside.

The Norwalk native also has excelled in the classroom. A Business Administration major, Dinh has collected a wide range of academic honors such as the College Sports Information Directors of America (CoSIDA) Academic All-District mention, the U.S. Track & Field and Cross Country Coaches Association (USTFCCCA) Academic honoree status and being featured on the CCAA All-Academic Team.